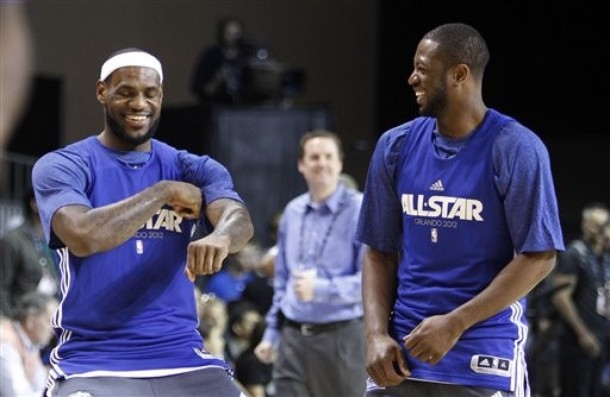 All-Star voting began just eleven days into the lockout-shortened NBA season, which is not exactly enough time to properly evaluate players. At this point however, with the All-Star Weekend in full swing, we've seen enough games to give players a grade for their progress so far this season. HHH writers Diego Quezada, Rob Smith and Surya Fernandez got together to judge the Heat roster as it currently stands.

Part 1 will focus on the starters...

Even for James, this season has been ridiculous. His 32.5 PER is a career-best, and the statistics don't tell the whole story. James is the best offensive and defensive player in the league, and not in danger of being caught in either department. He's averaging career-highs in FG%, 3pt%, rebounds, TS% and PER. If James continues at his current pace, he will win his 3rd MVP award, barring another Malone-Jordan screwjob. While his playoff performance will ultimately determine the success of this Heat season, it would be foolish to ignore how historically great James' 2011-12 campaign has been thus far.

James is the undisputed MVP of the first half of the season. He has played every position from point guard to power forward and has defended players from Derrick Rose to Dwight Howard. He takes shots closer to the basket and only shoots 3s when he's in rhythm, adding up to a shooting clip of 55 percent from the field this season. My only complaint? The players he has guarded have gone off from 3-point distance multiple times – Dorell Wright, Caron Butler, Carlos Delfino, J.J. Redick, etc. James often plays as the "free safety" on defense, but he has to close out to his man to contest his shot.

LeBron really does spoil us with his play because we expect nonstop greatness. At this point in the season, it would be unfair to criticize much as his MVP candidacy continues to gain steam with one scintillating performance after another. And yet, none of it matters much if he doesn't continue all of his good habits (the defensive intensity, making proper choices with the ball in his hands and be more than a spectactor when Wade has the ball) deep into the playoffs and into the NBA Finals. And no mental mistakes in crunch time during the postseason will be tolerated either. Those are the facts but the road to championship glory out in the East doesn't appear too daunting. In truth, a committed LeBron who is dominating on both ends of the floor and has a steady post-up game is daunting for every other NBA team.

Wade got injured in the third game of the season, so he didn't get off to a great start. He still made two game-winning buckets early in the season while playing with injuries, though. But in his last 11 games, Wade has shot better than 50 percent every single game. He's also second in the NBA in Player Efficiency Rating, only to James.

Without Wade? The Heat would be good, not spectacular like they have been since Wade finally is healthy and is moving freely and aggressively. When LeBron is working perfectly in tandem with him on the open floor, the team is unstoppable. He's playing more like he did when he was on the Dream Team, refining his game to be as efficient as possible without trying to do everything himself, while still remaining quite deadly attacking the rim or from midrange. The 3-point shooting has been rendered extinct, no one misses it.

Contrary to one prominent ESPN employee's opinion (fast forward to the 19-minute mark), Wade is having one of the best seasons of his stellar career. His minutes are down, but Wade has been as efficient as anyone besides James. His 28.4 PER is 2nd highest in the league (trailing only James), and his blocks are up 50% from last year (from 1.1/game to 1.6). His current defensive rating (points allowed per 100 possessions) of 98 is the best of his nine-year career. Wade's excellence gets overlooked by many because of James' once-in-a-generation talent, but he remains a top-5 all-around player.

Bosh was dominant when Wade was out with injuries but you still wish he could have more of those types of game together with Wade and LeBron. Thursday's game against the Knicks, where he was the leading scorer for the Heat, is hopefully a positive sign for the rest of the season. Still, maybe it's not a bad thing that he's comfortably settled into being the third option on offense while remainining professional and not complaining (at least not in public) as long as the team is winning.

This grade has more to do with the circumstances surrounding Bosh than his actual ability. Bosh, moreso than Wade or James, has had the hardest time adapting to joining the Heat. After being the number one option in Toronto, he's had to defer to Wade and James, possibly too much. Bosh is not only getting fewer opportunities on the offensive end, but he has been less efficient with the touches he does get than he received with the Raptors. Bosh's best performances of the season came when Wade was sidelined. While the Heat are a better team with Wade in the lineup, Bosh may be a better individual player when he's more of a focal point. With that said, the seven-time All-Star has been a solid defender all season and his willingness to sacrifice personal statistics for the good of the team should not go unnoticed.

Bosh deserves immense credit for shooting remarkably efficient when Dwyane Wade went down so the Heat didn't miss a beat then. But the 6-foot-11 power forward has also drifted from several games when Dwyane Wade and LeBron James dominate. Still, Bosh has recently shown increased production on the glass. One of Erik Spoelstra's smartest changes to the rotation this season was putting Bosh on the floor with four other reserves at the start of the second and fourth quarters. It keeps him playing aggressively.

This is not to say that Chalmers is a better player than Chris Bosh, because he's not. However, the former Kansas Jayhawk has made the three-year, $12 million contract he signed in the offseason look like a bargain. His 67% true shooting percentage (FG% which also takes into account free throws and three-pointers) ranks third among all NBA players, and Chalmers' 46.5 3pt % ranks fifth in the Association. Chalmers' role is to make open threes, and he has been incredibly efficient in doing so. Despite early clamoring for rookie Norris Cole to unseat him, Chalmers has established himself as the team's starting point guard, and his skillset is particularly well-suited to this roster. Pat Riley clearly made the right decision in sticking with Chalmers instead of bringing in a band-aid like Chauncey Billups or Baron Davis (yes, people actually wanted him).

Ever since a poor performance Dec. 27 against the Boston Celtics that had people questioning Chalmers' ability to stay in the starting lineup, Chalmers has had a career year. He deserves credit for working on his 3-point shot over the lockout and coming into training camp in shape. He's now shooting 46 percent from the 3-point line and has developed into a good point guard for this team. Not bad for a second-round pick.

What's there not to like? Chalmers is finally playing consistently and has been giving the Heat's offense a huge boost with his outside shooting. Maybe it was a good thing that Norris Cole was breathing down his neck earlier this season for the starting job because Chalmers is now a legitimate and valuable starter to this rotation. He's even cut down on those dreadful unforced turnovers.

Now in his fifth season with the Miami Heat, Anthony delivers what he always has – a defensive presence at the rim, good screen-setting and effort. He still has trouble catching passes, but he apparently worked on his jump-hook over the lockout and can score when he's left wide open. Although he is undersized, his athleticism enables him to defend the pick-and-roll well. The Heat's defense is predicated on covering lots of ground, and they need an athletic center to suffocate opponents.

Maybe has no business starting for such a good team and yet he is a major contributor to their success. Put aside the fact that he'll always be a limited basketball player and appreciate what he does bring to the table is precisely what the Heat needs for their defense to be as suffocating as it is. On offense, his game has become marginally better but more rebounds on both ends of the floor would be nice.

The Warden is one of the most athletic, if not offensively-skilled, big men in the league. His ability to guard perimeter power forwards and protect the paint with his shot-blocking has earned him a permanent spot in Miami's rotation. While he doesn't contribute a lot of scoring, Anthony is an excellent role player who knows what he's on the court to do. He doesn't rebound the ball particularly well, but, as the only legitimate shot-blocker on Miami's roster, he's invaluable.

Stay tuned for Part 2 where we grade the bench players...