Heat dominate in fourth, pull away from Sixers

Share All sharing options for: Heat dominate in fourth, pull away from Sixers

Two nights after giving up 58 second-half points to an inferior Milwaukee Bucks team, the Miami Heat (17-6) were determined to put forth a better effort on their own end of the court. Mission accomplished. 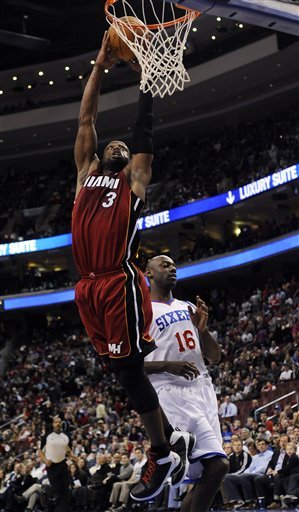 Dwyane Wade (10-for-20 from the field, 26 points, 5 rebounds, 4 assists) led a balanced offense that produced six Heat scorers in double figures. The Heat's bench nearly quadrupled its scoring production over Wednesday's effort in Milwaukee, tallying 27 points compared to the punchless 7-point outing against the Bucks. Mike Miller was particularly effective, scoring 10 of his 12 points in the fourth quarter. Miller shot 5-for-7 from the field, including 2-for-3 from three-point range, and posted a team-best +/- of +24 in just 22 minutes of playing time.

Leading 79-71 with 8:07 remaining, the Heat's lineup of Wade, Miller, LeBron James, Chris Bosh and Udonis Haslem held the Sixers scoreless for the next 5:46, stretching the lead to 94-71 during that span. It's safe to assume we'll be seeing more of that 5-man unit going forward. Heat head coach Erik Spoelstra said, "I wasn't planning on doing it the entire fourth quarter, but it worked out well, particularly on the defensive end." James added, "We played that lineup a few times during the postseason but we weren't healthy. It's great to have that lineup out there now that we're healthy."

The Heat's point guard duo of Mario Chalmers and Norris Cole was outstanding. Chalmers (5-for-8, 13 points, seven rebounds) and Cole (4-for-8, 11 points, 2 rebounds) combined for just 2 assists -- and 2 turnovers -- but each shot 3-for-4 from three-point territory. James (8-for-16, 19 points, 12 rebounds, eight assists) and Bosh (5-for-11, 12 points, 5 rebounds) were relatively quiet, but that may have been by design. Of the Heat's more balanced offensive effort, Spoelstra said, "This was a very good team...team...win. We did an excellent job executing, our turnovers were down, I liked the spacing and the way the ball was moving. There was a collective difference today, where everybody was trying to help each other, move the ball and find the open guy."

The Heat also limited its turnovers, committing just eight after losing possession 17 times against the Bucks. "We know we can't win ballgames when we're turning the ball over 20 times a game," said Spoelstra.

Miami addressed its defensive woes from Wednesday night's game in a lengthy meeting yesterday. "We were there two to three hours," Spoelstra said, "And we had to speak the truth. Everybody was pure about it." James intimated that the meeting was an emotional one. "It was no-holds barred, no tongues being held. Nobody can take things personal," James said. Whatever was said during that meeting appears to have worked. Spoelstra said, "The most important thing is that this team improved in the last 48 hours. It's not always going to be a smooth ride."