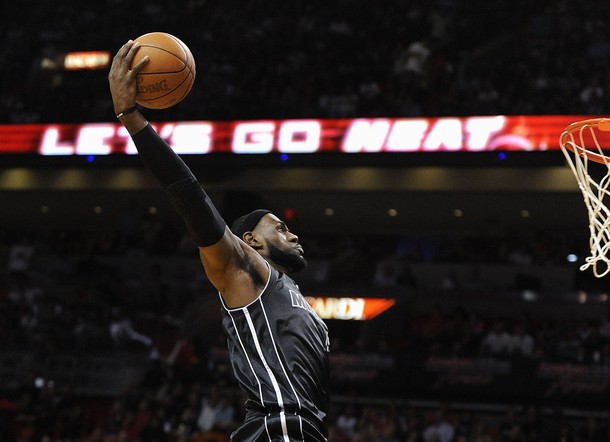 The NBA announced today that Miami HEAT forward LeBron James was named the Eastern Conference Player of the Month, presented by Kia Motors, for January 2012 (which also includes games played during December 2011). This marks the 14th time a HEAT player has earned Player of the Month honors in franchise history and James' fourth as a member of the HEAT.

Kobe Bryant was named the Western Conference Player of the Month.

James helped lead Miami to a 16-5 (.762) record through January, matching the best start to a season in franchise history, while averaging 29.2 points, 8.3 rebounds, 7.1 assists, 1.80 steals and 37.4 minutes while shooting 55.1 percent from the field and 40.6 percent from three-point range. He posted nine double-doubles while leading the team in scoring 16 times, assists 15 times, minutes on 10 occasions, rebounds and steals seven times each and in blocks three times. James recorded nine 20-point, 10-rebound and five-assist games and five 30-point, 10-rebound, five-assist games while leading the HEAT to their most wins during the month of January in franchise history. Miami finished with a 12-win month, surpassing the previous franchise-best of 10 wins which occurred three times (2001, 2002 & 2006).

James, the three-time Player of the Week for the month of January, is currently the only player in the league averaging at least 20 points, seven rebounds and seven assists per game this season. Additionally, he has now recorded at least 15 points, five rebounds and five assists in 24 straight games, becoming only one of two players in NBA history to hit those marks in that many consecutive games along with Oscar Robertson. Among league leaders this season, the 2012 NBA All-Star starter ranks second in scoring (29.7), fourth in field goal percentage (.553), tied for sixth in minutes (37.5), 10th in steals (1.81), 13th in assists (7.0), 17th in three-point field goal percentage (.436) and tied for 25th in rebounds (8.3). Appearing in 20 of Miami's 21 games, James led the team in scoring 16 times, tallying 25-plus points 16 times and 30-plus points on 11 occasions.

Here is a closer look at the month for James: