Share All sharing options for: Heat hold off Raptors rally for 95-89 win

The Toronto Raptors fought back from a 16-point deficit to cut it to three with 3:23 left to go, but the Miami Heat held on for a 95-89 win that moves them within a game of Chicago for the top seed in the Eastern Conference. 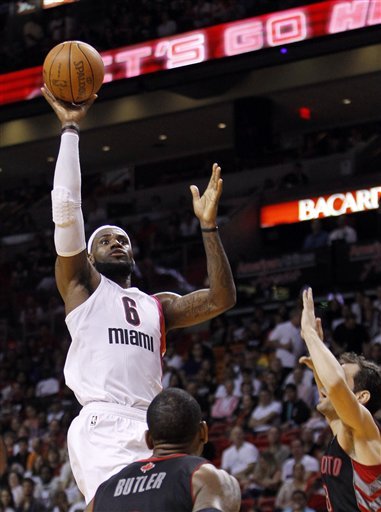 Coming out of a timeout while nursing a three-point lead, LeBron James made a strong play to the basket and drew a hard foul from Amir Johnson. James made both free throws and then stole the ball on the Raptors’ ensuing possession for a dunk. But after the Heat forced a miss from Toronto, James launched an ill-advised pass to Dwyane Wade that ended up resulting in a turnover. The Heat had a 89-82 lead with 1:38 seconds left; they just needed to kill the clock. Nonetheless, Miami played good enough defense to pull out the win.

The Heat started the Super Bowl Sunday matinee playing poor defense, letting the Raptors hang around. Two consecutive Mario Chalmers 3-pointers in the third quarter extended Miami’s lead to 71-57, but Toronto made it somewhat of a ballgame with two back-to-back 3s of their own, one from Linus Kleiza and the other from Jerryd Bayless. For the last four minutes of the game, the Heat used the lineup of Wade, Mike Miller, James, Udonis Haslem and Bosh, the same one that blew out the Philadelphia 76ers in the fourth quarter Friday night.

Do-everything power forward Udonis Haslem had another good game, finishing with eight points and nine rebounds. He also made a few of those 15-foot jumpers he had trouble with earlier in the year, including one bucket with 49 seconds left in the game. Norris Cole had four points and a nice alley-oop pass to James for a dunk.

Outside of those players, everyone else only showed up intermittently, though. Chris Bosh had a nice drive for a dunk in the third quarter and grabbed eight boards, but finished with just 12 points on 3-of-13 shooting. Shane Battier and Mike Miller combined to shoot 1-for-9 from the field. Chalmers is shooting the ball great this year, but at what point does Erik Spoelstra give some of Battier’s minutes to James Jones? Battier came here to bring defense, intangibles and 3-point shooting. So far, he has struggled mightily with all of the open looks he’s gotten.

The Cleveland Cavaliers will look for revenge against the Heat when they visit Miami for a 7:30 p.m. game Tuesday.