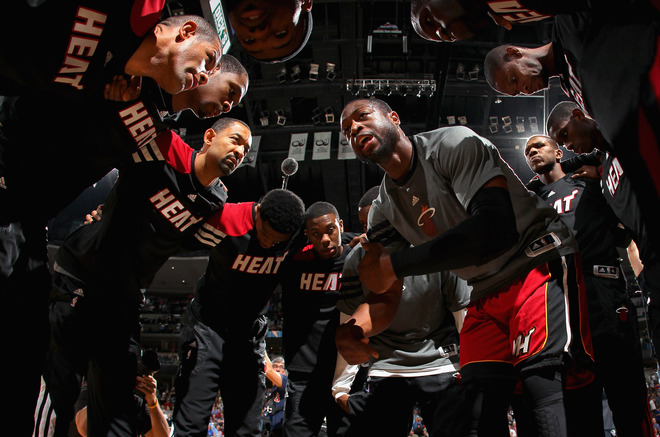 Most NBA fans have learned by now that it's not who starts the game, but who finishes the game. That line of thinking is especially relevant when it comes to this Miami Heat team.

Last year during the Eastern Conference Finals a "closing team" emerged in LeBron James, Dwyane Wade, Udonis Haslem, Chris Bosh and Mike Miller. Those five obviously miss two traditional positions -- point guard and center. The ironic perception about this team is that the exact things that some point to as flaws can be turned around into actual strengths. Not having a "true point guard" as a closer may spell trouble for most teams, but then again "most teams" don't have Dwyane Wade and LeBron James. Both James and Wade are more than capable of handling the ball towards the end of a game; in fact, it's preferable that they handle the ball at that point. Their remarkable athletic ability enable them to guard a variety of players, creating flexibility for Erik Spolestra in late-game situations.

While having a true center to bash down low may be a luxury this team doesn't have, the presence of Bosh and Haslem -- two forwards that can lure other teams' big men outside the box, in turn opening the paint more so than if a traditional center was down there clogging it -- counters that. While the Heat may lack that big post-up man, they counter it with hybrid forwards that can make the open jumper with regularity. That leaves Mike Miller, who has become somewhat of a "utility man" for this Miami Heat team. Even through injuries last season, he did all the little things, and was a better rebounder than most expected. This season Miller is not only throwing his body around doing the little things, but his shot has been on point - shooting an unbelievable (and most likely unsustainable) 58% from the field. Miller is noticeably more comfortable this year, and has provided much more than he did last season on the offensive end.

When the Big 3 joined forces, Haslem and Miller followed, and many envisioned that group standing as the Heat's strongest five on the court. With a good team, sometimes good problems arise. In this off-season the Heat added Shane Battier, a lock down defender that has shown the ability to knock down the three pointer when needed in his career. Unfortunately, only half of those advertised skills seems to have made it to Miami, because Battier can't throw a brick into the ocean right now (31% on the year, .091% in last five games). That kind of shooting won't get Battier on the court in late-game situations, so it seems as if Miller's spot would be safe for the time being. Another player that could fit into that slot if Miller or Battier were to get injured or underperform is James Jones. While he lacks the type of defense Battier brings to the table, he arguably is the best 3-point shooter on the team and depending on the circumstance that could be what the Heat need in a particular moment. Again, these are good problems to have. Last season there were times where the Heat were so desperate, Eddie House was on the floor late. This season the Heat are a solid nine players deep on any given night, with players tailor-made for any given situation. A player like James Jones may not see the court for an entire game, but he may be needed if the situation calls for it late. Battier may not have found his 3-point shot yet this season, but defense doesn't slump, and that will be needed down the line.

As for now the strongest closing team remains the same as it was last season in James, Wade, Miller, Bosh, and Haslem. Although Chalmers may be having a career year shooting the three, his defense against the top point guards must improve before he can be trusted in the crunch time. Spoelstra will no doubt tinker with this lineup depending on whom the opponent is. When it comes down to it, there is nothing "traditional" about this team -- and in the end that may just be what makes it special.