Share All sharing options for: Heat Sheet: Haslem, Heat pull away from Cavs

Despite uneven play through the first three quarters, the Miami Heat dominated the fourth to come away with a 107-91 victory that moves the Heat to 19-6, the best 25-game start in franchise history. 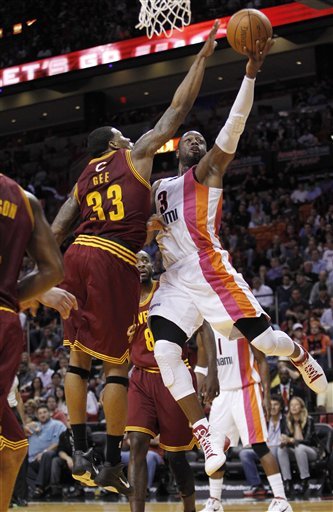 The Positives: Chris Bosh and Dwyane Wade built up Miami’s lead early in the final stanza of play. Bosh made a nice drive and dunk, and Wade made two straight field goals to give the Heat a 92-78 lead. After the Cavaliers cut the lead to eight, Udonis Haslem pulled through to make sure the game didn’t slip away. Wade found him on a layup, and James assisted on one of his patented 15-footers on Miami’s next possession. In the final minute, Haslem slammed home an alley-oop pass from James to ice it.

Bosh made the most of his limited opportunities, making six of his 10 shots to finish with 15 points and nine boards, many of which came in traffic. Bosh’s rebounding numbers have not risen from last year’s total – possibly due in part to Haslem’s presence – but tonight his increased upper-body strength helped him grab more rebounds. Mike Miller made two 3-pointers to finish with eight points and nine rebounds, a season high. Although he didn’t play at all in the fourth quarter, Mario Chalmers had four 3s to finish with 14 points.

The Negatives: The Heat turned the ball over during their first two possessions after only having five mishaps in the first half. The Heat’s three stars were the main culprits in this category, combining for 13 (eek!) of the team’s 16 turnovers. Miami seemed a step slow to come into the second half, throwing errant passes and playing sub-par defense.

Norris Cole had a nice end-to-end run for a transition layup in the second quarter, but that was the only bright spot for him. He shot just 1-of-7 from the field and picked up three fouls, helping the Cavaliers get in the bonus early in the fourth quarter.

The Bottom Line: Although Miami played well only in spurts, the Heat performed well enough to win. This home game against a sub-.500 team was important to win because the Heat will play five games over the next seven days, including their only back-to-back-to-back set of the season.

The Heat will visit the Orlando Magic tomorrow for a 7 p.m. tip.