Share All sharing options for: Magic Use Long Ball to Trounce Heat

Dwyane Wade (15-for-24 field goal shooting, 33 points) was nearly unstoppable for the Heat Wednesday night. Unfortunately, so was the Orlando Magic's three-point shooting. 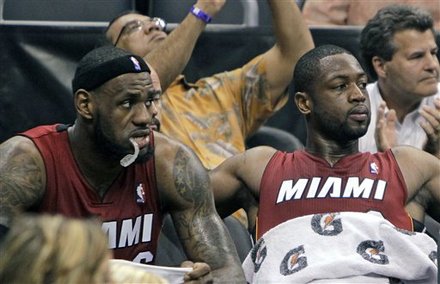 Orlando (16-10) set a franchise record for three-pointers attempted, converting 17 of their 42 shots (40%) from beyond the arc en route to a 102-89 victory over Miami (19-7). Heat coach Erik Spoelstra said the Heat's defense wasn't as bad as it may have seemed and credited Orlando for hitting a number of tough shots. "They set the tone from the get-go. Obviously, the amount of threes that they were able to take and make was the difference in the game," said Spoelstra. "You have to give them credit because they sustained it...the whole night, they had us on our heels." Wade added, " You can't stop a team from taking threes. They live and die by it, and they lived tonight."

Dwight Howard was the star of the night, putting up 25 points, 24 rebounds, three steals and two blocks. Spoelstra said the Magic's hot shooting forced the Heat to deviate from their principles of limiting Howard's inside opportunities and commit to contesting Orlando's perimeter shots. "He had a lot of room to operate down there and he's a great player," said Spoelstra. LeBron James said, "Sometimes you gotta pick your poison, but we gave up both tonight." Howard now has as many 20/20 games this season (six) as the rest of the NBA combined.

Miami withstood 24 first-half points from Ryan Anderson to keep the game competitive early. The Heat cut a 17-point second quarter deficit to three, trailing 53-50 at the half.

James and Chris Bosh both struggled throughout the contest. The two combined for just 29 points on 10-for-28 shooting.

Earlier in the day, Oklahoma City Thunder center Kendrick Perkins criticized James' Twitter habits, implying that James was more worried about garnering attention than winning championships. James responded after Wednesday night's game, saying,"For me, social media and Twitter is all about connecting with the fans. Did I call him out? I can see why he might've felt embarrassed, but I would never apologize for interacting with my fans. That's just me having love for the game and connecting with my fans."