James, Wade deliver in clutch to win against Pacers

Share All sharing options for: James, Wade deliver in clutch to win against Pacers

The Miami Heat made numerous careless mistakes down the stretch against the fifth-seeded Indiana Pacers, who played with more energy than the Heat early on. But LeBron James and Dwyane Wade more than made up for their mishaps with two clutch baskets to give Miami a 93-91 win to improve to 31-9 on the season. 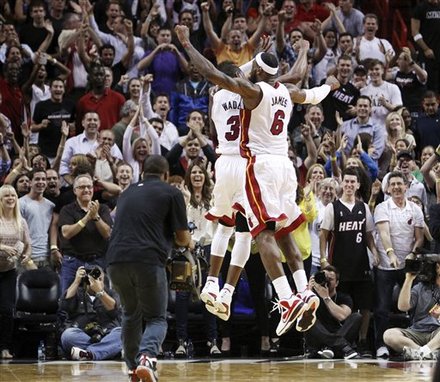 Wade found James in the corner for a 3-pointer to tie the game at 85 with 10 seconds remaining. On the Pacers’ ensuing possession, James defended point guard Darren Collison and forced him into a jump-ball. Late in the overtime period, Udonis Haslem secured a critical offensive rebound that gave Miami the chance to wind down the clock. Wade dribbled around the 3-point line, made a pump-fake, drew contact and made a long two-point jumper with a tenth of a second left. The shot itself was amazing, but Wade should have gone to the line for the and-one. Only able to score on a tip-in with such little time left, the Pacers had to go for an alley-oop, but James deflected the pass.

The Heat’s numerous errors – 20 turnovers, 11 missed free throws – put Miami in danger of losing the game. Wade threw an errant pass to James late in the fourth quarter after picking up a steal with Miami down two. But James made a three-point play off a nice outlet pass from Wade to put the Heat ahead 82-81 with 46 seconds left. Haslem committed an ill-advised foul on the other end, giving the lead back to Indiana, though.

In the overtime, Miami fell behind by four early, and James and Wade missed three free throws. But James nailed a 3 and then found Chris Bosh for a jumper to tie the game before Wade delivered the dagger. It wasn’t always aesthetically pleasing, but the Heat played some strong defense in crunch time to win in spite of those mistakes.

Wade scored 22 of his 27 points in the first half, shooting 10-of-16 from the field with four rebounds and seven assists. He toyed with whomever guarded him early, but rarely had opportunities in the third quarter and went scoreless in that period. Nonetheless, the 2006 NBA Finals MVP deserves immense credit for carrying the Heat early when James and Bosh were cold and making his third game-winning shot this year. His previous game-winning shots came on the road, against the Charlotte Bobcats and Minnesota Timberwolves.

The two-time MVP played the entire second half and overtime – logging 47 minutes in total – and scored 11 of his 27 points in the fourth quarter to go along with eight boards, four assists and four steals. He played great end-to-end basketball in the final moments of the fourth quarter, and no one will criticize James for passing to Bosh with a minute left because Bosh’s shot went in.

Bosh scored 13 points on 6-of-13 shooting from the field and chipped in six rebounds and two blocks. Udonis Haslem played 32 minutes off the bench and grabbed 11 rebounds. Despite the Pacers’ frontline of the 7-foot-2 Roy Hibbert, David West and Tyler Hansbrough, the Heat won the rebounding battle 50-40.

Mike Miller sprained his left ankle after stepping on Bosh’s foot in the second quarter. X-rays were negative, and Erik Spoelstra said that he doesn’t plan to for Miller to undergo an MRI.

The Heat will play next in Orlando Tuesday night at 7:30.