Share All sharing options for: Magic outlast Heat 104-98 in overtime

If Tuesday night's matchup with Miami was Dwight Howard's last in an Orlando Magic uniform, he went out in style.

Howard, who has been the subject of trade rumors leading up to Thursday's trade deadline, dominated the Heat (31-10) with a 24-point, 25-rebound performance, leading the Magic (28-15) to a 104-98 overtime victory. Miami again struggled to run Orlando off the three-point line, as the Magic connected on 11 of their 28 attempts from beyond the arc.

Dwyane Wade hit a three-pointer with 38 seconds remaining to tie the game at 94. Shane Battier struggled mightily with his shot in the fourth quarter, missing all four of his three-point attempts in the final six minutes of regulation. LeBron James routinely created open shots for Battier, including two in the final 90 seconds, but Battier was unable to cash them in. James struggled too, scoring just two of his 19 points in the fourth quarter and going scoreless in overtime. Head coach Erik Spoelstra defended his decision to play Battier over James Jones down the stretch, saying, "Shane was giving us terrific defense out there." Wade's would-be game-winning jumper went in-and-out as regulation ended, sending the game to overtime. 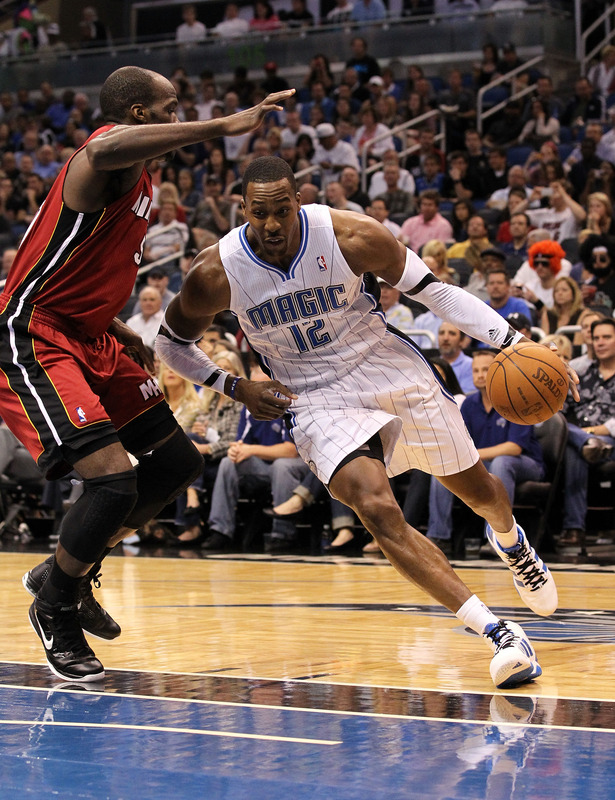 The seldom-used Jones was instrumental in Miami's second quarter 20-0 run, which turned a 41-35 deficit into a 55-41 lead. Jones hit back-to-back 3s during the run and connected on three of his five field-goal attempts. The Heat took a 56-45 lead into halftime, but looked disinterested in the third as the Magic outscored them 27-17. Spoelstra said, "In the third quarter, we did not play our best basketball. I didn't like the lack of focus in the third."

Howard was dominant, but he got help from some of his teammates. Jameer Nelson, in the midst of the worst season of his eight-year career, exploded for 25 points (10-for-16) including four 3-pointers. Nelson entered the game shooting 40% from the field and a paltry 33% on threes. Ryan Anderson was also a thorn in the Heat's side, as he tallied a double-double of 16 points and 12 rebounds, seven of which came on the offensive glass. J.J. Redick played 43 minutes and was a game-high +26. The Magic's long-range shooting allowed Howard to operate inside with impunity, and Miami was left scrambling on a number of possessions where Nelson penetrated into the heart of the defense. "That was probably the back-breaker," Spoelstra said. "His (Nelson's) ability to repeatedly penetrate and break us down."

The next 36 hours will be very interesting for Orlando. Yahoo!'s Adrian Wojnarowski reported earlier in the day that the Magic were dealing with friction in the front office, as GM Otis Smith and head coach Stan Van Gundy would prefer to trade Howard while CEO Alex Martins is intent on keeping the center and trying to convince Howard to re-sign with the Magic in the offseason. Wojnarowski's sources have stressed that Howard is intent on signing with the Nets, and despite reports that he would be open to remaining in Orlando if the team acquired more talented players, the Magic's lack of attractive trade assets (other than Howard) makes that prospect a dim one, at best. The Magic have been underwhelmed by previous trade offers for Howard, but they might be left with nothing to show for him at season's end if they refuse to move him prior to Thursday's deadline.

The Heat will not have time to fret about the loss, as a matchup with the Eastern Conference-leading Chicago Bulls (35-9) awaits them Wednesday night.