When Derrick Rose was declared inactive for Wednesday night's Heat-Bulls matchup, logic suggested that Chicago would struggle to score against the NBA's fourth-best defense. Instead, John Lucas played like Rose.

Lucas scored 24 points on 9-of-12 shooting and the Bulls shot over 50 percent (10-for-19) from the three-point line as Chicago (36-9) upset the Heat (31-11) 106-102. The game wasn't as close as the final score indicated, as Chicago maintained a double-digit lead for the majority of the second half until Miami rallied furiously in the waning minutes. Alas, the hole Miami dug over the game's first 45 minutes proved to be too deep to fight their way out of in the final three. 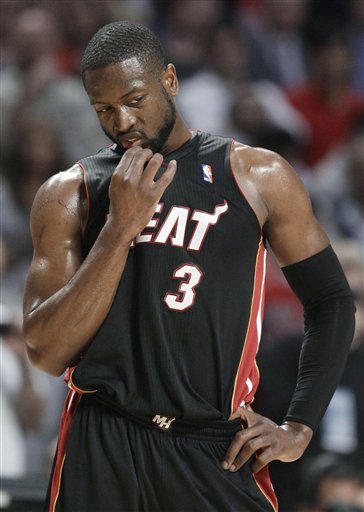 Lucas, who was a member of previous Heat training camp rosters, appeared to play with a chip on his shoulder against his former team. "That's probably part of it," Spoelstra said. "We were one of the teams that cut him. He was a big factor in this game." LeBron James was also complimentary of Lucas' effort, saying, "He spearheaded their bench mob. Everybody's in the NBA for a reason, you can't disrespect guys."

Sun Sports' John Crotty noted during the post-game show that the Heat's defensive scheme, which emphasizes protecting the rim, often leaves them vulnerable to outside shots, and Wednesday's game was a prime example. Lucas, Kyle Korver and Luol Deng took advantage of their clean looks, combining to hit eight of their 15 attempts from beyond the arc.

Heat coach Erik Spoelstra was more concerned about the Heat's lack of toughness, as Miami was outrebounded 50-34. "This game was won in the trenches," Spoelstra said. "They absolutely annihilated us on the glass. That's two straight nights of dealing with that. We need to be able to get into that fistfight under the glass. Everything that was 50-50, they dominated."

James and Dwyane Wade kept the Heat competitive far longer than the team deserved -- the duo combined to shoot 30-for-51 from the field; the rest of the Heat shot just 8-for-34. James said of the rebounding disparity, "We're undersized, but we've just got to figure it out and put more bodies on guys." The solution might have to come from someone not currently on the roster, as the Heat's frontcourt is one of the league's smallest. Miami ranks in the bottom half of the league in rebounding, and routinely has trouble dealing with Chicago's size. Team president Pat Riley has been forthright about his desire to augment the Heat's power rotation, and this loss might be the incentive Riley needed to engineer a deal before Thursday's 3 p.m. trade deadline.

Bench scoring was another area where the Bulls dominated, as Chicago's "bench mob" outscored Miami's reserves 56-15. The Heat bench wasn't even as effective as the 15 points would indicate, as two James Jones threes in the final minute nearly doubled the bench's output. Jones' playing time has become a polarizing topic among Heat fans, and now, seemingly, Heat players too. LeBron said of Jones, "We all know what James is capable of, and hopefully he continues to get minutes. Everytime he shoots the ball, we think it's going in. He has no fear." Spoelstra was non-committal when pressed about Jones' playing time, vaguely stating, "We'll see, but he's definitely going to play while Mike (Miller) is out anyway." Spoelstra had previously stated that Jones was going to see some playing time while Miller was out, so it's yet to be seen whether Jones' impressive play will have any effect on how often his number is called.

The question among the pro-Jones crowd (of which I am admittedly a long-time member) is not whether Jones will play, but rather how much. Jones scored 8 points in the second quarter against Orlando Tuesday but didn't see many minutes afterwards. Wednesday, after entering in the second quarter just before the Heat went on a run, Jones didn't see meaningful minutes until the game's outcome was a foregone conclusion. Considering the recent shooting struggles of Mario Chalmers and Shane Battier, it would seem that Jones is the most effective floor-spacer the Heat have at their disposal for the time being.

With the loss, the Bulls now lead the Heat by 3.5 games for the first seed in the Eastern Conference. Miami will try to avoid a third straight defeat when they meet the Sixers in Philadelphia Friday night.