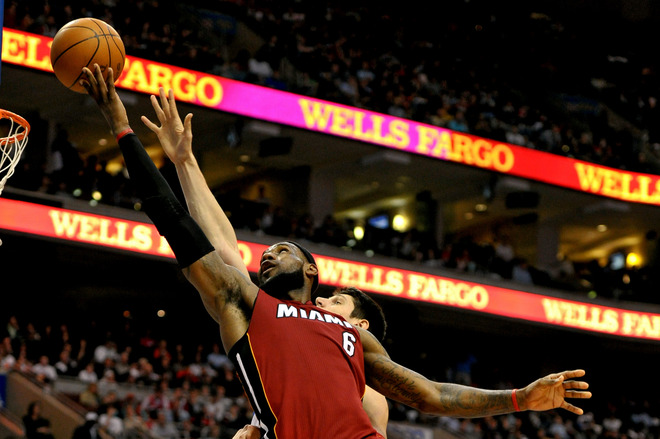 The cliché "it was a tale of two halves" is generally tired and overused. If there was ever an appropriate time to use it, however, it was Friday night. The Miami Heat (32-11) nearly squandered a 29-point third quarter lead, eeking out an 84-78 victory over the Philadelphia 76ers (25-19).

The tale began in encouraging fashion, with the Heat showing a renewed focus to rebounding and LeBron James scoring 14 first quarter points. Miami dominated the first 24 minutes and took a 57-30 lead into the intermission. I even started writing this game recap during halftime. Then I had to delete everything and start over.

That's because as impressive as the Heat were in the first half, they were equally lifeless in the second. After enjoying a 30-23 advantage on the boards in the first half, Miami was outrebounded 20-3 in the third quarter. Head coach Erik Spoelstra was disgusted by the Heat's failure to clean the glass. "It was offensive rebound after offensive rebound, a couple casual turnovers, all jump shots. We know what our identity is, what makes us successful and what gets us in trouble. It's about committing to it. We're capable.

The Heat finished the game on the wrong side of a 54-42 rebounding margin, and Miami's failure to protect the glass coincided with an incredibly awful offensive performance in the second half. After scoring 57 first half points, the Heat mustered just 27 in the game's final 24 minutes. Miami's offensive impotence allowed the Sixers to whittle a 29-point deficit down to four with 1:27 remaining. However, LeBron James, the engineer of many oft-maligned clutch performances, was Miami's closer on this night. James hit an elbow jumper with 1:05 remaining and sealed the game with two free throws with 18 seconds left. While Twitter -- and most members of the media -- were busy watching Lehigh shock Duke, LeBron was disproving a lot of the narratives commonly advanced about his play at the end of games. Udonis Haslem was also a major factor, scoring eight of his 10 points in the fourth quarter. Dwyane Wade said of Haslem's performance, "He hit some big shots. No matter how much he has struggled with his shot, you can always count on him to do something positive."

James was ambivalent about the Heat's polarizing performance, acknowledging the shortcomings while reminding everyone that the Heat came away with a win. "We can take some of the good from the first half and all the bad from the second half," James said. "But that won't take away from us coming into this building against a really good team and getting a win." Wade expressed a similar sentiment. "We came in very focused and started the game off as well as we have in a long time," Wade said. "It shouldn't have been a dogfight like this." On picking the Heat up when the team was struggling to put points on the board late in the game, James said, "My teammates have the confidence to trust me to either make a shot or make the right pass."

Spoelstra was visibly frustrated by the Heat's second half effort. "It's not about personnel for us. We proved that in the first half," Spoelstra said. "If we play with a real sense of urgency, toughness and a commitment to our identity, we can play this game at a high level. If we don't, things can turn around real quickly, as we saw in the second half. We still want to find another level, but we need to get back to the level we were playing at (before the All-Star break). Right now, we're not there."