The Miami Heat hosted the Orlando Magic March 18 after registering an uneven 5-4 record following the All-Star break, including an overtime loss to the Magic just five days earlier. But Dwyane Wade scored 14 points in a decisive fourth quarter to give Miami the 91-81 victory. The Heat’s record now stands at 33-11, tied with Oklahoma City for the second-best record in the NBA. Miami also extended its home winning streak to 13 games. 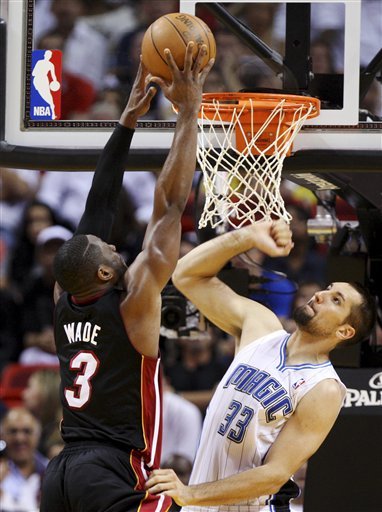 A Chris Duhon 3-pointer cut Miami’s lead to 69-68 with nine minutes left in the game, but Wade scored the Heat’s next six field goals to stretch the lead back up. Then, fellow stars LeBron James and Chris Bosh executed a pick-and-roll play to get the 6-foot-11 power forward an and-one. Bosh’s three-point play put the Heat up 84-73 with 3:46 remaining, serving as one of the key baskets in the game.

The Heat and Magic finished their season series 2-2, with each team winning at home. These two teams could play each other in the second round, and Miami would hold home-court advantage barring a monumental collapse. It was encouraging to see the Heat clamp down on defense in the fourth quarter, forcing turnovers and manufacturing easy baskets. Orlando turned the ball over 20 times for the game and scored just 10 points in the first 8:44 of the final stanza of play before Quentin Richardson made two meaningless 3-pointers.

Since returning from his personal leave, Bosh had struggled. He had shot 38 percent from the field and averaged just 13.4 points and 5.5 rebounds over the last five games coming into the Orlando game. But the Heat went to Bosh early, as he showcased his post game against Ryan Anderson for a few hook shots. Bosh made his first six shots to finish with 23 points on 9-of-13 shooting from the field, seven rebounds and three assists. His touches dwindled as the game went on, but the James-to-Bosh pick-and-roll late was a step in the right direction.

Wade scored a game-high 31 points on 13-of-25 shooting from the field and 5-of-7 shooting from the foul line to go along with six rebounds and four assists. He did not receive his usual resting period to start the second and fourth quarters; Wade has consistently played fewer minutes than the other two members of the Big Three this season, but didn’t tonight. James played 39 minutes, Wade 38 and Bosh 37.

The two-time MVP struggled from the field, shooting just 4-of-14 and committing five turnovers. A few of James’ attempts went in-and-out, but he still found ways to affect the game. James grabbed 12 rebounds, dished out seven assists and collected five steals.

Erik Spoelstra slightly modified his rotation, having James Jones substitute in for Wade in the first and third quarters – Shane Battier had done it all season long. Even so, Battier played for all of the fourth quarter and made a 3-pointer late in the game. Mario Chalmers added seven points and five rebounds, all the more necessary because Norris Cole was ineffective. The Heat actually out-rebounded the Magic 42-36 after losing the battle of the boards 46-36 in their last meeting with Orlando.

The Heat will host the Phoenix Suns Tuesday at 7:30 p.m. on NBATV.