The Miami Heat (28-7) were missing one of their Big Three for Thursday night's game in Portland. You could say the remaining two filled the void. 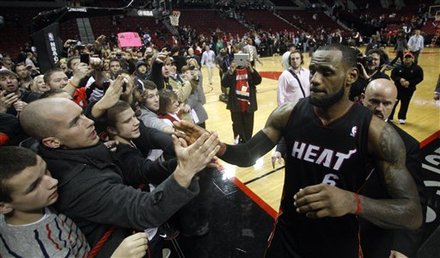 With Chris Bosh away from the team mourning a death in his family, LeBron James and Dwyane Wade combined for 43 first-half points as the Heat pulled away early en route to a 107-93 victory over the Trail Blazers (18-18). Miami fell behind 14-6 to open the game before going on a 26-10 run to close out the quarter. The Heat continued their strong play in the second period, outscoring Portland 28-18 to give themselves a 60-42 halftime lead. Miami led comfortably throughout the second half and James' three-pointer with 4:16 remaining gave the Heat a 98-85 lead, ending Portland's hopes of a late comeback.

Heat head coach Erik Spoelstra was proud of the way his team responded to their early struggles. "This is a tough place to play. This team (Portland) plays with great energy and force here, but we took the challenge," Spoelstra said. "We'll take it and move on. The trip gets tougher from here. This (Miami) is a no-excuse team and it's a no-excuse season."

Spoelstra credited James for ensuring that Bosh's absence did not lead to a letdown. "Certainly we miss him (Bosh) and he's a big component of what we're trying to do," Spoelstra said. "LeBron really helped. Bigger than any of the plays he made, he really eased our minds by being able to start at the four. We had struggled without Chris in the past, but we've made some strides."

James finished with perhaps his most efficient performance of the season, tallying 38 points on 13-for-22 shooting with 11 rebounds, six assists, five steals, zero turnovers and a violent chasedown block of a Raymond Felton layup attempt. Spoelstra added, "He eases a lot of my anxiety. I don't know if there's another player in the league who can handle what he does mentally. He was able to settle into his game, and it really speaks to LeBron's versatility." Wade, to his own credit, nearly matched James' pace, shooting 12-for-23 and finishing with 33 points, 10 assists, two rebounds, four steals and a block of his own. The duo (Wade in particular) took turns exposing Wesley Matthews' porous post defense throughout the first half.

Miami only scored six fast-break points, but four of those came on memorable sequences. Highlights of the night included this Wade-to-James alley oop as well as a nifty tic-tac-toe fast break which culminated in another James one-handed flush. "They're really developing a non-verbal communication with some of those plays," Spoelstra said. "They just give each other a look and they know where it's going. They're high-percentage plays for us, too." Udonis Haslem continued his recent string of solid play, posting his fourth double-double of the season with 11 points and 14 rebounds. Lamarcus Aldridge led the Blazers with 20 points, although he was fairly quiet after scoring 12 of those points in the first quarter.

With the win, the Heat gained sole possession of first place in the Eastern Conference. Miami will go for their tenth consecutive win when they travel to Salt Lake City to take on the Utah Jazz (16-18) Friday night at 9. James said, "We showed up tonight. If we come out with the same mindset (in Utah) that we showed up with tonight, we'll give ourselves a good chance to get the win." Bosh will miss Friday's game but is expected to re-join the the Heat for Sunday's matchup with the Lakers.