Heat use late run to squeak by Suns

Share All sharing options for: Heat use late run to squeak by Suns

The Phoenix Suns made two straight 3-pointers to go up 90-80 with seven-and-a-half minutes remaining in the game, putting the Miami Heat in serious jeopardy of losing their 13-game home winning streak. 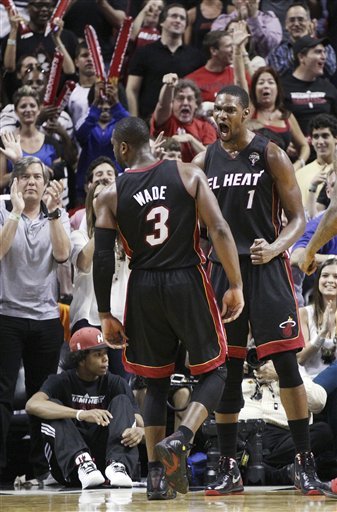 But on a night in which the Heat looked flat at times, Miami went on one of their more memorable fourth-quarter runs this season. The Heat used stifling defense and crisp offense to score 17 unanswered points, and Udonis Haslem made two free throws with 22 seconds left. The Heat won 99-95, improving to 34-11 on the season.

The decisive run started with six Heat free throws, but Chris Bosh connected on a layup to cut the deficit to two. On the Suns’ ensuing possession, Mario Chalmers stole the ball from Steve Nash -- his seventh turnover of the night -- and pitched the ball ahead to Dwyane Wade for a dunk. About a 1:30 later, Chalmers found a cutting Wade for an acrobatic and-one layup that had Wade screaming in excitement after making the shot. A James jumper ended the run, and the Suns’ crunch-time execution was troubling to say the least. Down four with 29 seconds left, Steve Nash had a wide-open layup after Wade jumped on a pump-fake. But Nash passed the ball to Channing Frye, who attempted an errant floater.

After regaining his rhythm against the Orlando Magic Sunday night, Chris Bosh continued to attack offensively. He scored 13 of his 29 points in the first quarter, finishing on 12-of-16 shooting from the field and 5-of-6 shooting from the foul line to go along with eight rebounds. He scored six points in the fourth quarter, but the Heat went too long without feeding Bosh the ball. His jumper could have worked particularly well against Phoenix’s zone defense.

Bosh’s production was vital to the Heat because Wade and James both struggled offensively. Wade shot just 6-of-17 from the field and James was 8-of-18. Wade had a few layup attempts go in-and-out, and James collided into Grant Hill in the final minute, staying on the ground for about a minute. After a timeout, James went right back in the game, though. The two-time MVP had eight rebounds, six assists, two steals and two blocks – including one on Marcin Gortat. Wade chipped in seven rebounds and five assists.

Joel Anthony missed the game after suffering a sprained ankle in Sunday’s win over Orlando. Dexter Pittman started in his place, committing four fouls in 14 minutes and never returning after checking out with eight minutes left in the third quarter. He did have two nice jump-hooks, but was slow to defend pick-and-rolls, which Nash ran beautifully with Gortat all night long. Anthony is a better defender than Pittman, and tonight showed why the Heat should add a big man (or two). Eddy Curry played for five minutes in the second quarter, and made a layup after Wade gave him a nice pass.

Anthony’s absence and Pittman’s ineffectiveness led Udonis Haslem to play 31 minutes off the bench. He notched 15 points and nine rebounds on the night, getting to the line 12 times. Haslem was resilient, attempting shots at the rim in traffic. No one else on Miami’s bench did a lot.

The Heat will have the next two days off before flying up to Detroit to face the Pistons Friday at 7:30 p.m.