Share All sharing options for: Heat coast by Pistons

After imposing their dominance over the Detroit Pistons (16-31) on both ends of the floor en route to a 59-36 halftime lead, the Heat fell asleep again in the final 24 minutes. Despite the uninspired second half performance, Miami did just enough to earn its fourth straight win, an 88-73 victory over the Pistons. 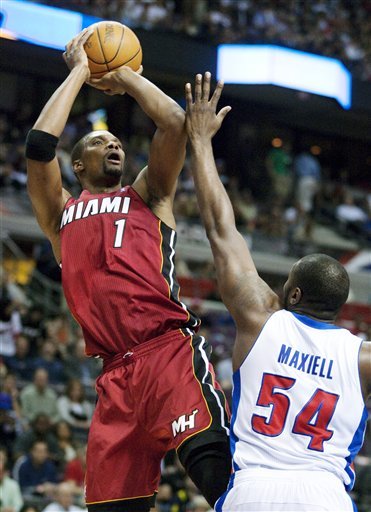 When the Heat stretched the already-large halftime lead to 26 on Mario Chalmers' three-pointer with 5:43 remaining in the third, it appeared as though Miami's superstar trio of Dwyane Wade, LeBron James and Chris Bosh would get some much-needed rest with a back-to-back approaching on Sunday and Monday. Detroit continued to play hard however, and Jonas Jerebko's dunk with 8:57 left in the game cut the Heat lead to 74-65. Miami responded with a 10-2 run and effectively put the game out of reach.

Newly-acquired forward Ronny Turiaf made a strong first impression, tallying four points and three rebounds in eight first-half minutes. More importantly, Turiaf's mobility and instincts proved to be a seamless fit in the Heat's rotation-heavy defense. He also studied game film from previous games to prepare for Friday night's debut. "I take pride in being prepared," Turiaf said. "I did my homework last night, I did some more homework this morning. The concept is pretty easy--go after people." Backup center Dexter Pittman struggled to defend the pick-and-roll in previous games, but Turiaf's basketball IQ and ability to move laterally should help Miami on the defensive end going forward. It was not a coincidence that the Heat held the Pistons to 36 first-half points. Heat head coach Erik Spoelstra was complimentary of Turiaf's Heat debut. "He did some good things. He's very active, very intelligent. He fits our fabric, our mold. He makes things happen defensively. As he continues to spend more time with us I think he'll get better and better."

The game followed a path eerily similar to last Friday's win over the Sixers. In both games, the Heat put together an utterly dominant first half before failing to score 30 points in the second half. Wade remarked earlier during the season that he doesn't like building large leads early in road games because it's easy to lose focus and turn the switch back on after the home team goes on a run. There was a noticeable drop-off in energy in the Sixers game, and the issue came up against the Pistons too.

Spoelstra was not as visibly concerned as he was after the Sixers game, attributing this letdown to turnovers. "There were a lot of good things that we did," Spoelstra said. "Everybody in that locker room knows that the one thing we won't feel terrific about is those turnovers. But that shouldn't overshadow a lot of the good things we did, particularly on defense."

The Heat will travel to Oklahoma City to take on the Thunder in a nationally-televised matchup Sunday night.

At the team's hotel prior to Friday's game, the Heat organized a team photo with each player wearing a hoodie to honor the family of Trayvon Martin. Donning a hooded sweatshirt and armed only with a bag of Skittles and a can of iced tea, Martin was fatally shot by self-appointed neighborhood watchman George Zimmerman after Zimmerman labeled the black 17-year-old as suspicious Feb. 26. Zimmerman claimed he acted in self-defense, and has not been arrested. James said after the game that the team decided to express their support for the Martins because a lot of Heat players have children themselves, and this could've happened to one of them.

Wade even changed his Twitter profile picture to symbolize his support for Martin. Several Heat players wore shoes with messages like "We want justice" and "RIP Trayvon Martin" during the game against Detroit. A Heat spokesperson released a comment saying in part, "We support our players and join them in hoping that their images and our logo can be part of the national dialogue and can help in our nation's healing."