If Sunday night’s meeting between the Miami Heat and Oklahoma City Thunder ends up serving as a Finals preview, the Heat know that they have their work cut out for them between then and now. 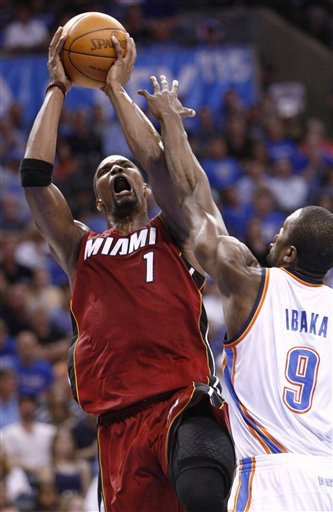 After an evenly-played first quarter, Miami committed several costly turnovers that led to fast-break points for the Thunder. The Heat also double-teamed Kevin Durant off of pick-and-rolls, leaving big men open for easy dunks. Kendrick Perkins and Serge Ibaka combined for 35 points on 16-of-21 shooting from the field. Miami never strung together a big run in the second half, losing 103-87.

James Harden caused plenty of problems for the Heat, scoring 19 points off the bench on 6-of-7 shooting from the field. Udonis Haslem had eight points and nine rebounds, and Shane Battier knocked down two straight 3s to cut the deficit to eight with seven minutes left. Other than that, Miami got little from the supporting cast. Mario Chalmers and Norris Cole combined for just three points, continuing the trend of lack of production from the point guard spot since the All-Star break.

And in the battle between the top two MVP candidates, Kevin Durant had the better of LeBron James. Durant scored 28 points on 11-of-20 shooting, nine rebounds and eight assists. In contrast, James had just 17 points on 8-of-18 shooting, seven assists and four turnovers, offering little in the second half. During a frustrating third quarter, Miami’s only safety valve was Dwyane Wade shooting from beyond the arc. Coming into Sunday’s game with just six made 3s on the season, Wade made three triples in the third frame – including a 60-foot shot at the buzzer.

The 2006 NBA Finals MVP stood as one of the few bright spots for Miami, scoring 22 points on 6-of-10 shooting and 7-of-7 shooting from the foul line. Chris Bosh scored 18 on 6-of-11 shooting, but grabbed only five rebounds in 36 minutes of action. He also committed five turnovers, even passing the ball to Udonis Haslem’s back in the second quarter one time. Miami’s Big Three combined for 15 turnovers, with Wade committed six.

Joel Anthony usually plays well against smaller teams with athleticism, and he did again tonight. Anthony had three blocks – including meeting Durant at the rim – and scored four quick points to open the game. But Anthony bobbled passes LeBron James threw to him in traffic and he only played for 16 minutes.

The Heat now stand three-and-a-half games behind the Chicago Bulls for the top seed in the East and a game behind the Thunder. Erik Spoelstra subbed out the Big Three in the final minutes, with the game out of- each and the Heat in the midst of a back-to-back. Miami will face the Indiana Pacers tomorrow night at 7:30 p.m.

Tracy Martin, the father of the unarmed black teen who was shot to death last month in Sanford, Fla., thanked the Miami Heat for taking notice of the killing that has now become a national story. "I saw a post that D-Wade had saying, `I am Trayvon Martin,"' he said in an interview with The Associated Press. "To see all these athletes put Trayvon in the same sentence with them, it feels real good. Trayvon was an excellent athlete and if he could hear them saying his name, he would be so moved by it."

Just as the Heat did before Friday's game against the Detroit Pistons, several Heat players scrawled messages about Trayvon Martin on their shoes Sunday.