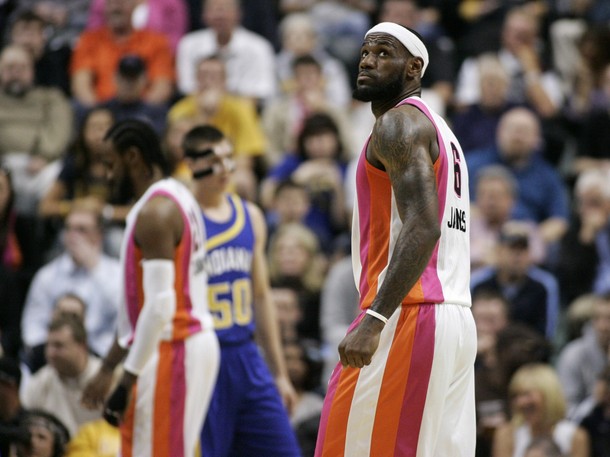 The Miami Heat failed in their attempt to sweep the four-game regular season series from the Indiana Pacers and did so with another road loss after a deflating setback against the Oklahoma City Thunder the night before. Without consistent efforts from LeBron James and Dwyane Wade, coupled with fellow starters Chris Bosh and Mario Chalmers having subpar games, the Pacers had an answer for every Heat run since the first quarter. Pacers point guard Darren Collison penetrated the Heat's offense at will and recently acquired Leandro Barbosa was a huge spark off the bench, showing his long range as well as some nice moves towards the basket. Tyler Hansbrough and Roy Hibbert also did their part inside the paint, slowing the game down and defending the rim with force (and a few hard fouls along the way).

The Heat fell behind from the start but managed to climb back from an 8-point deficit by the start of the second quarter by cutting down their turnovers, drawing fouls and a pair of 3-pointers courtesy of LeBron and Wade. While each had their moments, Wade's putback dunk with seven minutes left in the half in particular was one for the highlight reel, the Big 3 and the rest of the team's body language and overall demeanor felt "off" tonight. Chalmers post All-Star Weekend slump, dare we say reminiscent of Daequan Cook's freefall coincidentally timed after his own participation in the 2009 Three-Point Shooting Contest, continues to worry. The Sun Sports graphic after another Chalmers turnover said it all: in the last 10 games he's only averaged 5.6 ppg while hitting just 30 field goals and 20% shooting beyond the arc. This was a game where the Heat could have really used Norris Cole to contribute and he responded with a lackluster performance featuring zero points, assists, steals or rebounds and yet somehow managing to lead the team in +/- with +9 points in 19 minutes of service.

The Heat could have also used more dominant games from their top two stars, seeing as how Bosh struggled mightily from the field but also managed to grab just two rebounds in 36 minutes and Mike Miller still out with injury. Wade's sudden prowess beyond the arc (4-7 tonight after hitting 3-4 on Sunday versus the Thunder, after only hitting 6 for the entire season) might have bailed the Heat out from this being a blowout on the road. The Heat's overall struggles in the halfcourt offense and on the road, especially since the All-Star break, with about a month left to go until the playoffs start is reason enough for the Heat to get their act together and start dominating teams like they were doing not too long ago.

Give credit to the Pacers, they played hard but the Heat have too much talent and the motivation to win it all this year that a game like this shouldn't be played almost the entirety of the game in catch-up mode. This type of basketball, with just four fast break poiints and several unforced errors, isn't close to what the Heat have shown they can be consistently capable of. With the regular season reaching its conclusion quickly, Thursday's game versus the Dallas Mavericks at home on national television could be a turning point for the Heat season - for better or for worse.