What's wrong with the Heat?

Share All sharing options for: What's wrong with the Heat?

The Miami Heat entered the All-Star break with the league’s best record, soundly beating opponents night after night, but after Miami’s two double-digit losses to the Oklahoma City Thunder and Indiana Pacers recently, Chris Bosh described the team as in a "rut." The Heat have gone 8-6 since All-Star weekend. Even in wins over the Philadelphia 76ers and Detroit Pistons, Miami built up sizable leads only to let their opponents back in the game. That’s a far cry from the Heat’s nine-game, double-digit winning streak just last month. 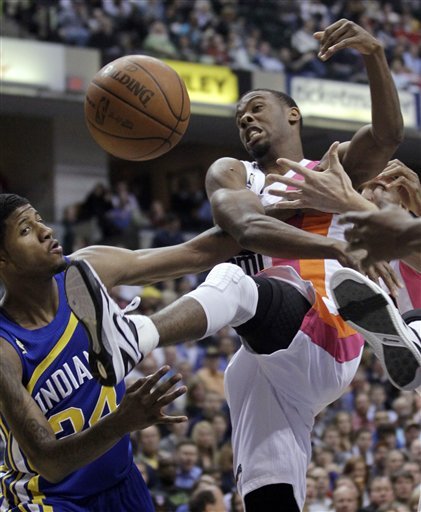 For one, the fast-break offense that the Heat used effectively at the start of the season is nowhere to be found. The Heat have failed to score 100 points in two weeks, and those transition opportunities that seemed plentiful throughout the first two-thirds of the season are now few and far between.

Miami’s lack of rebounding shoulders some of the blame here. Chris Bosh hasn’t registered double-digit rebounds since Feb. 21 and only grabbed two boards last night against Indiana. Bosh came into this season aiming to average 10 rebounds a game, bolstered with some added upper-body strength. But the six-time All-Star now averages fewer rebounds than he did last year. While Udonis Haslem’s presence may prevent Bosh from securing more rebounds, he simply cannot have seven rebounds combined over two games, as he has done just now.

Since enduring a hard foul and later colliding into Grant Hill during Miami’s win over the Phoenix Suns last night – injuring his elbow and suffering a blow to the head – LeBron Jameshasn’t looked like his normal self. He’s shot 23-for-54 from the field after that game, with his jump shot looking particularly off. He also may have dislocated his left ring finger last night. Perhaps James needs a game or two off to heal from these injuries. During Dwyane Wade’s extended absence earlier in the year, Bosh performed well as a second option. If James rests for a few nights, Bosh may find his offensive rhythm just in time for the playoffs.

But the Heat’s lack of production from the supporting cast is a significant issue as well. Mario Chalmers appeared to stand as Miami’s fourth-best player earlier in the year, but his shooting touch has eluded him since the All-Star break. The Heat need Chalmers’ 3-point shooting to space the floor, but in the last five games he has shot just 4-for-19 from beyond the arc. Norris Cole had six double-digit scoring outputs during Miami’s nine-game win streak – not only scoring in garbage time, but also making shots to build up those leads – but the last time he scored in double figures was March 6. After appearing like strengths for much of the season, Chalmers and Cole have now become inefficient.

After suffering through an injury-ridded season last year, Mike Miller has only played in 28 games this year. It’s also disconcerting that James Jones has made one more 3-pointer than Miller has this season despite playing 135 fewer minutes. It’s great that Miller can rebound and hustle, but Pat Riley gave him the Heat’s fourth-biggest contract because he envisioned him as a reliable scoring option.

The Heat still have 18 games before the 2012 playoffs, and Miami struggled after the All-Star break last year, losing five straight games at one point. The playoffs continually reveal the regular season to be inconsequential. Miami’s struggles against Chicago and Boston in the regular season did not show in their playoff series. Last year’s Dallas Mavericks went 13-9 to end the regular season, including a 110-82 loss to the Los Angeles Lakers March 31. What happened a few weeks later when those two teams met in the playoffs?

Even so, the Heat have some problems to fix, as they did at this time last year. This team should have little trouble rebounding from this recent malaise – as I said after the Heat’s three-game losing streak in January – but issues have certainly crept up recently.