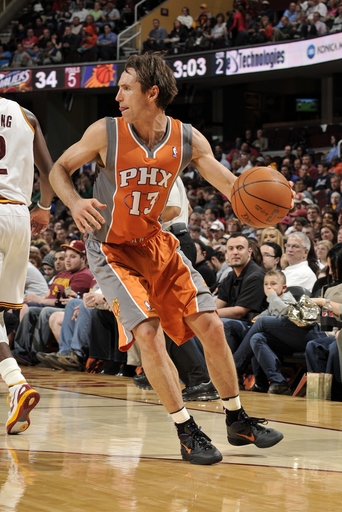 In an interview with Dan Patrick today, Phoenix Suns point guard Steve Nash said that he would listen to offers from the Miami Heat this summer. The player with as many MVPs as LeBron James will become a free agent this summer, and he said that he won't re-sign with Phoenix if the organization doesn't bolster the roster. The Heat will only have the mini-mid level exception of $9 million over three years to offer free agents. Pat Riley signed Shane Battier to that contract in December, but Nash was an All-Star this season. He likely will receive better offers from other teams.

The 38-year-old may have received some of the coaches’ votes for the All-Star Game based solely on his reputation, but he still is an effective player. He’s shooting 54 percent from the field, 39 percent from downtown and averages 11 assists per game. Moreover, his superior ball-handling skills would enable James and Wade to spend more time using their effective post games instead of handling those responsibilities themselves. In Miami, Nash might only play around 30 minutes per night -- similar to how much an aging Shaquille O'Neal played in Miami -- so James and Wade could still operate around the perimeter a fair amount of the time.

The three-time All-NBA First Team selection makes players better. One can see that upon looking at players who flourished with Nash during the Suns’ period of contention during the mid-2000s that now aren’t nearly as effective. But one can also view it the other way. Marcin Gortat, for example, was a nonfactor offensively for the Orlando Magic. With the Suns, he’s averaging 16 points and 10 rebounds a night, thanks in large part to the fact that Nash is a pick-and-roll savant.

Nash is better than either Mario Chalmers or Norris Cole and would instantly get the starting job. Although the Heat could sign Nash to a three-year deal, he may only end up staying in Miami for one season to secure that elusive championship. The eight-time All-Star could also serve as a good mentor for Miami’s two young point guards.

In between now and the start of free agency, one team will win the NBA championship, though. And for the Heat, the season is only considered a success if they win the championship. With the harsher luxury-tax penalties scheduled to come into effect during the 2013-14 season, Miami may move away from the Big Three model without one this year. The Heat may trade Bosh for two or three players and have an entirely different roster from this year’s one. But if the Heat do win the championship, Miami’s pitch to Nash will be more effective. It will be up to Nash to decide if he wants to take a haircut on his salary for a chance to win a ring. Only time will tell.