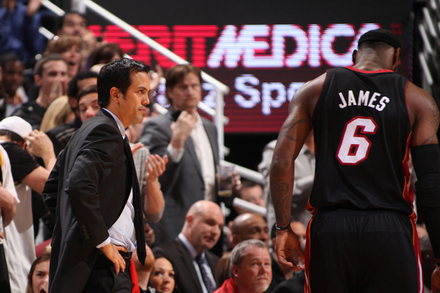 The Jazz led for the majority of the game and were able to withstand Miami's late push. The Heat outscored the Jazz 54-42 in the 2nd half but fell short in the final seconds, with Udonis Haslem missing the go ahead basket as time expired.

Miami played their 2nd game with out All Star forward Chris Bosh, but Battier filled in well as the substitute. Wade, Lebron and Battier combined to score 84 of the teams total 98 points.

The Heat elected to play small ball with Chris Bosh out, starting Shane Battier and pushing Lebron James to PF for the 2nd game in a row. With the Heat small frontline, the Jazz were able to seize control of the game, dominating Miami on the glass 50-32, including a staggering 23 offensive rebounds.

The Heat trailed the entire game but were able to take a 4 point lead late in the 4th quarter. Lebron James was red hot in the 4th quarter, pouring in 17 and finishing with 35 points, 10 rebounds and 6 assists.

Dwyane Wade also had a big night, racking up 31 points and 6 rebounds, but struggled late, missing a key free throw and committing two costly fouls down the stretch.

Shane Battier was the only other bright spot for the Heat, finishing with a season high 18 points and going 6-7 from beyond the arc.

Lebron James played phenomenal down the stretch, leading the Heat in their 4th quarter comeback but his decision to pass on the final possession drew some unavoidable questions. He had this to say after the game:

"We called the isolation play for me up top, and Millsap stayed on the elbow. With Udonis not being in the game and not playing that much, he wasn't able to make the shot but he had a good look, it just didn't go. It always comes to light when your teammates don't make the shot..I just try to make the right plays. I just wanted this game probably more then any game this season"

With one day off, Miami now heads to Los Angeles for a show down at the Palace on Sunday against Kobe Bryant and the Lakers.