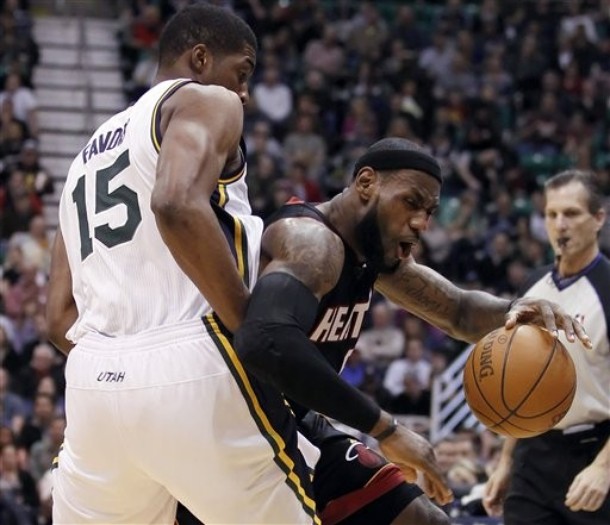 The Miami Heat almost came back from an 18 point margin late in the third quarter to keep their winning streak alive against the Utah Jazz. If only the Heat could have woken up earlier in the game. LeBron James scored 17 points in the fourth quarter to lead the furious charge to storm back into the game and take the lead. Wade missed a key free throw late in the game. Udonis Haslem had a final chance, after a Devin Harris 3-point play, with his formerly reliable midrange jumper courtesy of what will surely be a controversial decision by LeBron to pass it to him. Haslem had time to swing the ball to the other side to Mario Chalmers but instead missed the open jumper.

There are a few issues to raise with any Heat loss because well, they're the Heat. Shane Battier couldn't miss beyond the arc. So why did it take so long for him to get his 6th and 7th shot off (at that point well into the third quarter) when the Heat were behind by double digits? The Heat of all teams should know how much damage a player that's feeling it from long range can do to his opponent. Battier didn't attempt a shot in the fourth quarter.

There really is no excuse for coming out this flat for such a long stretch of the game. A back-to-back on the road out West is understandably rough but the Heat hadn't played in an entire week before Thursday's game. Also, give credit to the Jazz, their frontline abused the Heat in the paint with 23 offensive rebounds compared the Heat's 8, as well as outrebounding them overall by 18 rebounds.

Yes, Chris Bosh's absence was sorely felt on a game where he could have likely helped LeBron and Wade out on the Heat's offense and grab his fair share of boards. Unfortunately, the point guard production didn't help matters with only 5 combined points (2-14 FG shooting) from Mario Chalmers and Norris Cole.

And yet...the Heat were overdue for a stinker and they still climbed out of that hole and fought back in a tough road environment to give them an excellent chance of stealing a victory. LeBron wasn't just clutch, he was spectacular. Along with Wade, they combined for 66 points tonight a day after going for 71 points. When the Heat desperately needed some size down the stretch to stop the bleeding from all of those rebounds the team were giving up on both ends of the floor, Dexter Pittman filled in capably. If the Heat can quickly overcome that kind of a deficit, they at least can gain confidence any game is within reach no matter how poor they're playing. Quite frankly, the team needed to be challenged for a whole game after their ultra-dominating 9 game winning streak.

Now it's time to get some rest, the Heat have to fully adjust to the time difference and play a day game against the Los Angeles Lakers on Sunday. Chris Bosh's return in tme is still questionable.