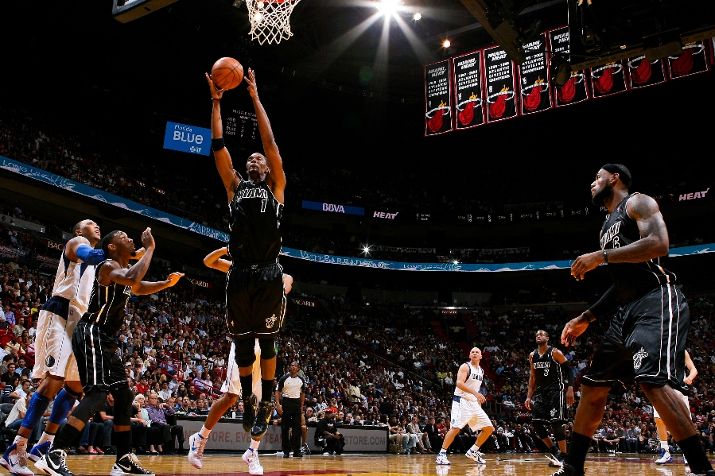 There's no place like home for the Heat, where the Big 3 trio of Dwyane Wade, LeBron James and Chris Bosh each had stellar performances to hand the Dallas Mavericks a second blowout victory for a regular season sweep and their 15th straight victory at the AmericanAirlines Arena. With the team undergoing criticism from the media and fans alike for their recent stretch of lackluster performances, the team enjoyed timely contributions from their supporting players and a higher level of energy and effort from both ends of the court. The Heat punished the Mavs inside with 42 points in the paint, compared to 24 points for the visiting team, and returned to their more familiar high octane offense while managing to play effectively against the Mavs zone defense.

Both LeBron and Bosh had 19 points and 9 rebounds, while Wade chipped in 16 points and 5 assists, but the team were in desperate need of production from their contributing players and finally got it from Mario Chalmers (12 points, 5 rebounds, 5 assists, 4 steals), Norris Cole reaching double digits in scoring, Ronny Turiaf again playing important minutes off the bench, and Haslem with a huge game going for 6-10 from the field for 16 points.

While the Heat's focus wasn't exactly razor sharp at the outset, it steadily improved as the game went on and the Mavs never truly threatened the Heat lead in the second half. Dirk Nowitzki had 25 points but was only 1 of 9 from the field after halftime. Only Lamar Odom, continuing the tradition of fellow ex-Heat players playing well against their former team, appeared to have any interest in helping Dirk out on offense and the team as a whole seemed content to simply chop away at the Heat players when protecting their rim without bothering to provide much weak side help to counter the Heat's crisp passing. As invisible as Vince Carter was during this game, he was the only Mavs player with a positive +/- for the game.

While the outcome of the game never seemed to be in doubt, some sloppy play resulting in multiple turnovers late in the fourth quarter seemed to set the stage for a furious comeback led by Dirk or Jason Terry, but it never happened as the Heat quickly responded with a 9-0 run to seal the win. Wade backed down Jason Kidd and had an easy dunk after a spin move, then later found Bosh inside the paint for the easy three-point play and also assisted LeBron for another dunk. The Mavs were within single digits at the start of the final quarter but never strung together a good stretch where they could have gone on an extended run to challenge the Heat.

As nice as getting revenge on their Finals opponent might have been, the schedule doesn't give the Heat much of a break with upcoming games at Boston, and at home against the Philadelphia Sixers, Oklahoma City Thunder, and the pesky Memphis Grizzlies. LeBron's injured finger didn't seem to bother him much but Wade was in obvious pain after jamming his hand while tying to make a pass in the fourth quarter. Mike Miller again did not play, though he stated earlier this week at Shane Battier's karaoke charity event that he was ready to go as soon as the coaching staffed calls on him.

In comments made earlier in the day, Jason Terry expressed interest in the Miami Heat when he becomes a free agent this summer. While stranger things have happened, Terry has been consistently been harsh to the Heat franchise since losing to them in the 2006 NBA Finals. With a new contract on the line and a chance to get another championship ring, Terry has taken a more positive attitude towards the Heat.

"Miami is definitely a title contender. For sure," Terry told FOX Sports Florida. "(Team president) Pat Riley is a great guy and what he's done with the organization is tremendous.

"No question, they need a veteran shooter, a guy who can score besides LeBron (James) and (Dwyane Wade), and they know they can count on. I'm a guy that's been in this league 13 years, (averaging) 15 points a night, easy. Off the bench or the starting lineup, it doesn't matter. So I think I'd be an asset to them."