Heat pull away from Raptors in fourth quarter

Share All sharing options for: Heat pull away from Raptors in fourth quarter

The Miami Heat jumped out to an 18-4 lead over the Toronto Raptors Friday night, but let the Raptors back into it. The game was even tied at 89 early in the fourth quarter. But at the seven-minute mark of the fourth quarter, James Johnson swung his arms and elbowed Dwyane Wade.

As Miami fans know, opposing teams don’t want to upset Wade. The Heat went on a 13-4 run after that elbow, winning the game 113-101. Wade and Bosh were the primary aggressors during the run; Wade scored 13 points in the final frame while Bosh scored 12 then. The former Raptor ended the game with a couple nasty dunks, prompting the Toronto crowd to boo him. 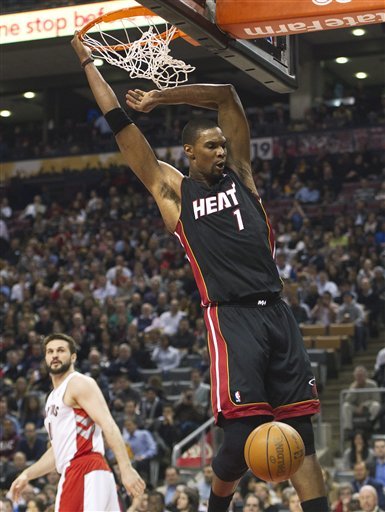 Bosh scored on Miami’s first possession in the game and kept playing well from then on. He finished with 30 points on 11-of-18 shooting from the field and a perfect 8-of-8 from the foul line to go along with eight rebounds and three blocks. Bosh seldom used his jump-shot, instead scoring in the paint with force, even dunking on Andrea Bargnani in the third quarter. Although the Raptors don’t have the most imposing frontline, Bosh also was aggressive against the Bulls in the Eastern Conference Finals. He has the ability to score in the paint and should commit to it more often, as he did tonight.

Like Bosh, the 6-foot-4 guard out of Marquette scored 30 points. Wade shot 12-of-19 from the field and 5-of-7 from the foul line, and added six rebounds, six assists, three steals, a block and no turnovers. Miami as a team only turned the ball over eight times. Wade spurred the Heat’s fourth-quarter push, splashing home a 3-pointer and later driving to the rim for dunks.

None of the Heat’s Big Three recorded 20 points Thursday night against Dallas, but all three of them surpassed that mark Friday. In addition to Bosh and Wade each scoring 30, LeBron James had 26 points on 11-of-18 shooting from the field and nine assists. James was a particularly good passer when the Raptors went to a zone defense, finding players cutting to the basket all night long.

Unfortunately for Miami, the Big Three needed to dominate offensively because the Heat had little support from the rest of the team. Udonis Haslem played well against Dallas last night, but was not with the team against Toronto due to personal reasons. Miami could have used him defensively; Andrea Bargnani scored 27 points on 10-of-17 shooting, playing like Dirk Nowitzki.

Mario Chalmers scored 14 points on 5-of-8 shooting from the field including two 3-pointers, but no one else scored in double figures. In an interesting move, Erik Spoelstra went to rookie Terrel Harris instead of James Jones tonight with Haslem out. The rookie out of Oklahoma State usually finds himself wearing a suit on game nights, but scored five points in 12 minutes.

The Heat will visit the Boston Celtics Sunday for a 3:30 matinee meeting. Haslem is expected to play.

In a written statement, Wade said that he didn’t have all the details, but that he has his thoughts and prayers with all those involved