Share All sharing options for: Kobe, Lakers get revenge on Wade, Heat

After sustaining a broken nose at the hands of Dwyane Wade's hard foul during last week's All-Star Game, Kobe Bryant said the incident would not give him any added motivation for Sunday's matchup with the Heat. His actions spoke louder than his words. 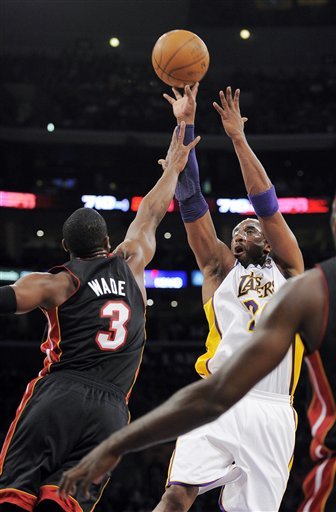 Bryant, who shot 14-for-23 from the field, erupted for 18 of his 33 points in the first quarter and the Los Angeles Lakers (23-14) controlled the game from start to finish, defeating Miami (28-9) 93-83. Miami has now lost consecutive games for the first time since early January and just the second time all season long.

Wade, meanwhile, never found his rhythm and fouled out after scoring just 17 points on 7-for-17 shooting while committing five turnovers. Most of Bryant's 18-point quarter came with Wade defending him, and Wade was visibly frustrated by the officials' calls (sometimes rightfully so) throughout the contest. LeBron James (12-for-26) was his typically elite self, registering 25 points, 13 rebounds, seven assists, three steals and two blocks. He didn't get much help, unfortunately.

Outside of Mario Chalmers (5-for-12, four threes, four rebounds), the rest of the Heat were largely ineffective, shooting 16-for-50 (32%) from the field.

Miami sorely missed Chris Bosh, who sat out his third consecutive game tending to a death in the family. Udonis Haslem started in Bosh's place and struggled, failing to score a point while hauling in just two rebounds in 19 minutes of play. Seldom-used power forward Juwan Howard played a season-high nine minutes and matched Haslem's 0-for-5 shooting performance. The Heat's frontcourt foursome of Haslem, Howard, Joel Anthony and Dexter Pittman shot 2-for-16 from the field and the Lakers outrebounded Miami 44-35. Andrew Bynum and Pau Gasol each recorded double-doubles, forcing the Heat to play an unconventional lineup with James at power forward defending Gasol, although James played effective defense on the Spaniard. Bryant said of his teammates, "(Bynum's) playing with a lot of energy and physicality. He can really carry a game for us, Pau as well. And when they do that, we can be a dangerous team." After the game, Bryant reiterated that there were no hard feelings between himself and Wade. "It was a freak play," Bryant said of the foul. "It happens."

Bosh is expected to be back in the lineup Tuesday night when the Heat host the New Jersey Nets (11-26) at 7:30. James rolled his left ankle stepping on a fan's foot near the end of the game, but the injury did not appear to be serious. Spoelstra called a timeout but James did not come out of the game and seemed to be moving well afterwards.