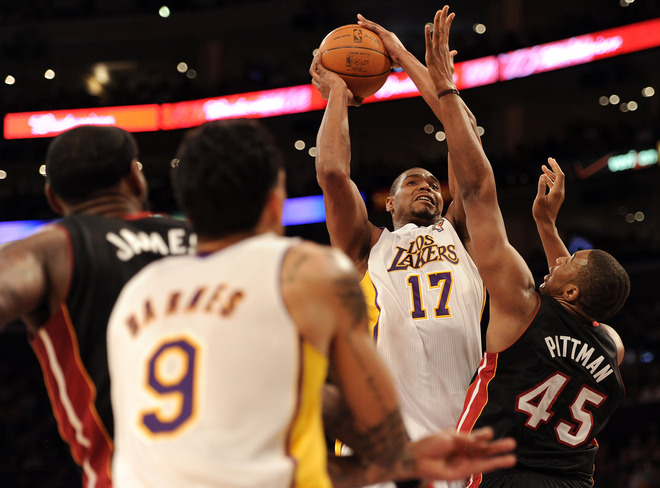 In the absence of Chris Bosh recently, opponents have exposed the Miami Heat lack of depth in the power rotation. In Miami’s 99-98 loss to the Utah Jazz Friday, the Heat lost the rebounding battle 50-32. Udonis Haslem grabbed just four rebounds in 28 minutes, far below his average of eight boards, but the Heat also missed Bosh’s average of eight boards as well. Moreover, Al Jefferson shot 10-of-20 from the field for 20 points. Against the Los Angeles Lakers Sunday, Pau Gasol and Andrew Bynum each recorded double-doubles. On the other side of the court, the Heat’s big men – Haslem, Anthony, Dexter Pittman and Juwan Howard – shot a combined 2-of-16 from the field, and those two field goals came from Anthony.

Pat Riley has known about this deficiency all year long. He has grasped at straws all throughout the season for any sort of upgrade that can play the power forward/center role. He tried to sign Greg Oden in December and has reached out to Krylyo Fesenko, Chris Kaman, Joel Przybilla and Kenyon Martin. 790 The Ticket’s Mike Ryan reported March 3 that retired power forward Rasheed Wallace worked out with the Heat, and The Palm Beach Post’s Ethan J. Skolnick confirmed the report, saying that Riley is actively seeking a big man. ESPN's Brian Windhorst said, "the Heat have been calling around to gauge demand for reserve big men as the trade deadline approaches."

Just before the season started, I noted how the salaries of LeBron James, Bosh and Dwyane Wade made it virtually impossible for the Heat to lure a quality center because those players cost money. Riley would have to hope the low-cost gambles on Eddy Curry and second-year center Dexter Pittman would work, but they haven’t. Pittman may not belong in the NBA, and the fact that Curry hasn’t even gotten off the bench in Bosh’s absence shows how little faith the Heat coaching staff has in him. The former Chicago Bull and New York Knick has always had a nice offensive game, but the fact that he didn't get off the court with Howard and Pittman missing layups may signal that his days in the NBA are numbered, too.

Pittman and Curry are both ill fits for this team; they can’t keep up with the other athletic players on the Heat, can’t defend the pick-and-roll and can’t rebound or block shots. For as limited as Joel Anthony is, he fits with this team because he plays good pick-and-roll defense, blocks shots, sets screens and can run with the perimeter players on this team.

Anyone the Heat manage to sign off waivers – short of Kaman – will ultimately stand as a stopgap option. A stopgap may be just what the Heat need because with a healthy roster, Erik Spoelstra will play Bosh, Anthony and Haslem as the primary players in the power rotation with James getting some minutes at the four. The Heat can just go ahead with that rotation and then select an athletic big man in the Draft. That's what Riley did with his point guard rotation last year; he signed Mike Bibby off waivers and then drafted Norris Cole.

On the other hand, perhaps the problem is more serious. Anthony doesn’t offer much on the offensive side of the floor, and when Haslem’s 15-footer isn’t falling his only points come from tip-ins. The Heat have an unbalanced roster replete with wings and thin on the frontline. Mike Miller stands as Miami’s best trade asset to acquire a solid big man because of his $5.4 million salary and the fact that he’s shooting 51 percent from beyond the arc this season. The Heat still have James Jones, who is overqualified for his current position as a walk-on. But what quality center could the Heat realistically acquire for Miller?

Because of Bosh’s critical role on the Heat and Miami’s lack of depth in the frontcourt, the 6-foot-11 power forward’s absence is felt. With everyone healthy, the Heat don’t need to have a particularly strong player to solidify the front-court, just someone who can run the floor and offer some tangible form of production, whether it is rebounding or making shots at the basket. The Bulls, Thunder or Spurs don’t have great frontcourts either, but Miami’s lack of offensive production at the power forward and center positions outside of Bosh is nonetheless disconcerting.