Chris Bosh returns to pace Heat to win over Nets

Share All sharing options for: Chris Bosh returns to pace Heat to win over Nets

With the Miami Heat returning home after losing two games on the road, Chris Bosh back after missing three games to tend to the passing of his grandmother and Dwyane Wade coming off one of his worse performances of the year, the New Jersey Nets had a perfect storm heading their way Tuesday night. The Heat built a 30-17 lead after one quarter and never looked back, rolling to a 108-78 win. 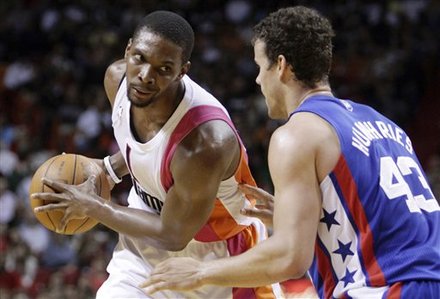 Bosh played aggressively from the beginning, scoring on dunks and layups in addition to his patented jumpers. He finished with 20 points on 9-of-14 shooting from the field in just 24 minutes of playing time. Bosh didn’t grab a rebound before halftime and finished with one board, though. But the Heat won the rebounding battle 30-29, thanks largely to LeBron James (nine) and Mike Miller (eight).

The Heat defeated the Nets in January without Wade, and the 6-foot-4 guard out of Marquette was unavailable for the second half Tuesday night when he rolled his ankle with a minute left in the second quarter. He watched the second half from the bench and not from the locker-room. Erik Spoelstra said that Wade could have returned in the game, but the Heat had a 27-point lead at halftime and host the Atlanta Hawks tomorrow on the second night of a back-to-back.

A balanced attack led to this win. James scored 21 points on 9-of-11 shooting from the field, including a half-court bank shot at the end of the third quarter. Shane Battier scored 11 off the bench, making three 3-pointers in the game. Norris Cole chipped in 13 points, nailing two 3s.

But perhaps the most encouraging sign for the Heat was the play of Dexter Pittman. The second-year center notched career-highs in points and rebounds, finishing with 10 rpoints and six rebounds. He dunked the ball off an offensive rebound and later attempted a jumper that bounced off the top of the backboard before falling in. He also made a nice hook shot and ran the court well for a 280-pound man. He played well tonight, but he has to convert at the rim consistently if he wants to remain as the Heat’s fourth big man in the rotation.

In garbage time, Mario Chalmers found Eddy Curry for an alley-oop that excited the fans that had stayed around until the end. The Heat’s huge scoring margin allowed Curry to play in his first game since Feb. 17 in Cleveland.