Share All sharing options for: Heat hold off shorthanded Hawks

The Miami Heat defeated the Atlanta Hawks without LeBron James and Dwyane Wade Jan. 5. Wednesday night, the Hawks came into the AmericanAirlines Arena without Joe Johnson, Tracy McGrady, Willie Green and Al Horford, who suffered a season-ending injury Jan. 13. For two-and-a-half quarters the game was strikingly reminiscent of the Jan. 5 game, with the injury-depleted Hawks simply out-working Miami to build a 10-point lead midway through the third quarter. But the Heat used some inspired play to fight back in the third and made some clutch baskets to put away the Hawks 89-86 and improve to 30-9 on the season. 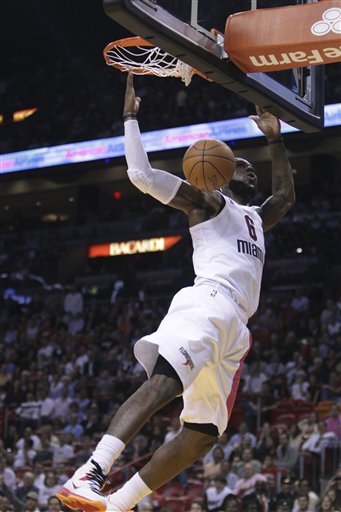 In a back-and-forth game that featured 12 lead changes, the Hawks led 80-77 with 3:29 remaining. But Chris Bosh shook off a 1-for-11 start from the field to score a nice shot inside to bring Miami within one. Wade then made a shot out of the post and later found Udonis Haslem and Bosh for jumpers to put the Heat up 85-81 with 33 seconds left.

Coming out of a timeout, Jannero Pargo made an and-one layup to bring the Hawks within one, but Wade found his nine-year teammate for an alley-oop. Pargo missed a 3-point shot at the buzzer to tie the game.

This game wasn’t always pretty, but it was good to see the Heat manufacture open shots when they needed to. The third-quarter run provided a necessary jolt to the team, with Mario Chalmers finding Wade on an alley-oop and the 2006 NBA Finals MVP later finding Dexter Pittman for a slam. With less than a minute left in the third, Wade missed a layup in transition. In the scramble for the loose ball, Zaza Pachulia angrily threw his arms at James while both players were on the ground. Pachulia was whistled for the loose ball foul and a technical foul. The 6-foot-11 center from Georgia also fouled James hard on a transition play earlier in the third quarter that the two-time MVP took exception to. It appears the chippy play that somewhat characterized these two teams’ seven-game playoff series in 2009 hasn’t gone anywhere.

James was the only Miami player who performed well throughout, finishing with 31 points on 12-of-20 shooting from the field, 11 rebounds and two blocks. He had to play 42 minutes Wednesday night simply because Wade and Bosh struggled for most of the night. Some in the media will claim that he stepped aside in the final moments, but James made numerous shots from the "right elbow" area that helped Miami chip away at the lead.

The 6-foot-4 guard out of Marquette struggled early, but made several key shots and assists to secure the win. He finished with 18 points on 7-of-17 shooting from the field, nine rebounds, six assists and three steals. With 2.7 seconds remaining in the game, Wade calmly sank two free throws to put Miami up three. In the Heat’s loss to Utah earlier this month, Wade missed a free throw that would have put his team up by three.

Bosh finished with nine points and eight rebounds while Haslem chipped in eight points. Erik Spoelstra used a strange rotation after intermission, keeping Miller on the bench for the entire second half. Pittman did not play for the first half, but played in the third and fourth quarters. To close the game, Spoelstra went with a lineup consisting of Mario Chalmers, Wade, James, Haslem and Bosh.

The Heat will have the next two nights off before hosting the Indiana Pacers Saturday at 7:30 p.m.