The Miami Heat visited Boston Sunday after struggling mightily on the road after the All-Star Game. The Celtics – one of the hottest teams in the NBA now – dominated the third quarter and defeated Miami 91-72. 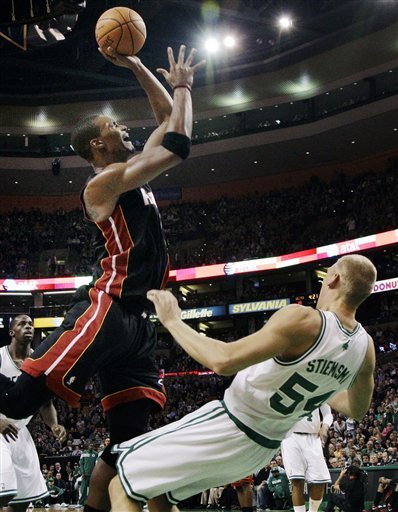 The Heat overcame an 11-point first-quarter deficit to tie the game at 40 late in the second quarter. The Celtics took a 49-44 lead into halftime, but blew the game open in the third quarter. Kevin Garnett exposed Miami’s slow defensive rotations, making wide-open jumpers and rolling to the basket on occasion for layups. Rajon Rondo had his way against Mario Chalmers from the opening tip, and was particularly effective in the third quarter. The loss marked Miami's lowest point total of the season, and Boston didn't have the services of Ray Allen.

On the offensive end, Miami tried to get Chris Bosh involved in the third period after Dwyane Wade and LeBron James got the Heat back into the game. It’s good that the Heat tried to give Bosh opportunities, but the 6-foot-11 power forward shot just 2-for-11 from the field. He air-balled two jumpers and then hit nothing but the backboard on another attempt. He should have gotten the ball in the paint, like he did against Toronto. Even when Garnett sat on the bench, Bosh couldn’t get going.

During the second half, the Heat couldn’t buy a bucket. Miami shot 36 percent for the game, and it’s difficult to win games shooting that inefficiently. But the Heat seemingly backed down after the Celtics played aggressively in the third quarter. Miami similarly failed to respond after the Oklahoma City Thunder and Los Angeles Lakers made runs in the third quarters of those games in March.

Shane Battier was one of the few bright spots for the Heat. He scored 11 points in the first half, including throwing the ball off Paul Pierce’s back on an in-bounds pass to make a layup. Moreover, Battier defended Pierce in the second quarter, preventing James from that defensive assignment.

James scored 23 points on 11-of-20 shooting from the field, but just attempted two free throws – indicative of a lack of offensive aggression. He missed a dunk attempt early and two alley-oop layups -- although one came from a bad Mario Chalmers lob pass. Wade struggled from the field and shot just 6-of-17. Avery Bradley had a nice block on Wade at point-blank range, but the ball bounced to Battier for a 3-pointer. On the positive side, Wade had eight rebounds, and Bosh had 11 rebounds.

The Celtics currently hold the lead in the Atlantic division; division winners automatically earn a top-four seeding in the playoffs. The second-place Atlantic division team, the Philadelphia 76ers, are currently slotted in the seventh seed – the team that would play Miami in the first round if the Heat keep their hold on the second seed. Miami would prefer to play the Sixers in the first round, so losing to the Celtics – helping improve Boston’s record – may actually benefit the Heat in the long run.

Miami will return home to host the 76ers Tuesday at 7:30.