Share All sharing options for: Celtics hot shooting enough to hold off Heat 115-107 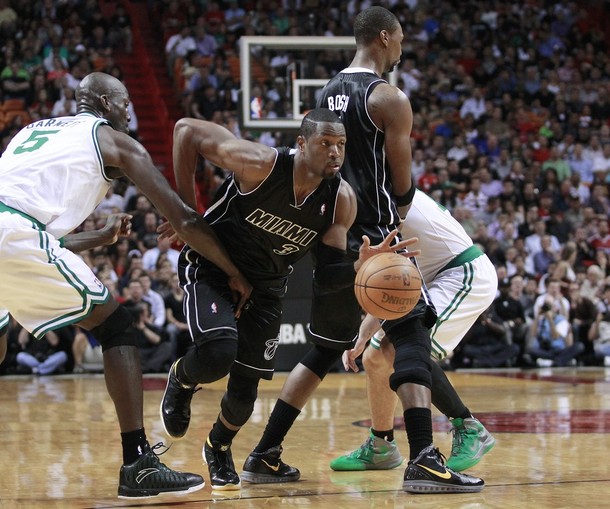 The Boston Celtics handed the Miami Heat their fourth loss of the season at the AmericanAirlines Arena with a 115-107 decision, beating them for the second time in the last ten days. The home team could not recover from an early 18 point deficit despite several opportunities in the second half to take over the game. The Heat's last lead of the game was at 22-20 with 3:30 left in the first quarter and they were as close as one point in the early stages of the fourth quarter but were unable to keep up with the Celtics' steady 60% field goal shooting for the game. Only three teams have now beaten the Heat twice this season, with the Celtics joining the Orlando Magic and the Milwaukee Bucks.

Much like Friday's home loss to the Memphis Grizzlies, the Heat's lethargic play at the outset forced them to play from behind from the outset of the game that ultimately spelled their doom. The Celtics scored 10 straight points and raced out to a 13-9 lead after the Heat had started out hitting 4 of their first 5 shots but then went cold with 5 straight missed shots. Chris Bosh missed his first three shots of the game that set the tone for another off night when the team could have desperately used his help to compliment another strong LeBron performance.

The game's offensive flow was dictated by short bursts of scoring runs from both teams. The Heat got back into the game early with 7-0 run featuring an alley-oop play from Wade for a vicious LeBron dunk as well as a James Jones three-pointer for a 20-17 lead. A Celtics run of 13 straight points soon after gave them a 35-22 lead. The Heat later scored 7 straight points midway through the second quarter cut the lead down to 10 points and also put together an 11-3 run with four minutes left in the second half. The Celtics answered that with 7 straight points in the following two minutes to boost their lead back up 61-46. In the second half, the Heat scored 9 straight points with 8 minutes left in the third quarter to cut the deficit to 5 points. The Celtics had a 13-3 run to boost their lead at 102-91, though the Heat had one last chance with a 7-0 run that cut it to 108-103. Kevin Garnett was key for the Celtics with his strong perimeter shooting that managed to keep the Heat at bay late in the second half.

Bosh's game was most disappointing, but Wade wasn't too far off with his cold shooting and frustration with his game constantly directed at the officials. Wade's 16 points on 7-11 shooting in the first half was a great start although he continued to miss at the rim, but he struck out after halftime with 0-6 FG shooting before finally scoring his first basket in the second half with just three minutes to go.

Erik Spoelstra's rotations are still a work in progress, with Norris Cole returning to the shuffle at the expense of Terrel Harris while Mike Miller received important minutes in crunch time and James Jones played effective early minutes but did not return afterwards. With another tough loss to a rival this late in the season, the Heat will need to pick up their interior defense and get Bosh back to his usual game very soon with two upcoming games against the Chicago Bulls looming large.