The Chicago Bulls dominated the overtime period against the Miami Heat 12-2 to win 96-86 Thursday night. Chicago’s win puts them four games ahead of the Heat for the first seed, likely locking them into the first seed in the East. 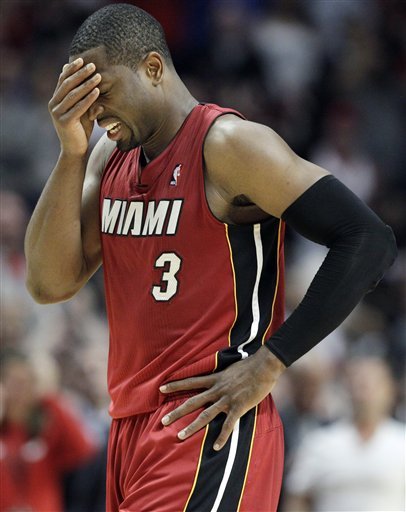 In a rather bizarre game that featured unconventional lineups -- more on that later -- the Heat generally outplayed the Bulls while reigning MVP Derrick Rose played and suffered when he sat out. Despite dishing out eight assists, Rose shot a dismal 1-for-13 from the field. After he subbed into the game with 3:30 left in the fourth quarter, Dwyane Wade made three straight shots to pull Miami to within 80-81. After Rose air-balled a lineup on Chicago’s ensuing possession, Chris Bosh grabbed an offensive rebound off a Wade miss and passed the ball to LeBron James for a 3. The Heat had an 83-81 lead with 49 seconds left to go. Bulls coach Tom Thibodeau pulled Rose the rest of the way after that shot.

James made only one of two free throws with 11 seconds left to put Miami up by three. The Heat blitzed Kyle Korver on the Bulls’ next possession, but Carlos Boozer found C.J. Watson open in the corner. Wade raced to contest his shot, but Watson dribbled once and nailed the 3 to tie the game. Wade missed a fade-away jumper, and the overtime period went perfectly for the Bulls, as the Heat failed to make a field goal in the extra period.

Miami opened the game with Udonis Haslem and Chris Bosh playing together. It was a good move, as I’ve always had the opinion that if those two players finish games, they can start games too. The lineup change also allowed Miami to go to the lineup that worked against the Bulls in the Eastern Conference Finals – the Big Three with Haslem and Mike Miller – midway through the first quarter. The Heat raced out to a 10-2 lead early, but the Bulls chipped away as soon as Miami went to the bench. Haslem actually sat out the entire second half with a stomach virus.

Miller shot just 1-for-9 from the field, although he did grab six rebounds. Miami got precious little from anyone other than the three All-Stars, with none of the supporting cast scoring more than four points in the game. To open the second quarter, the Heat used a lineup of Chalmers, Miller, Shane Battier, Chris Bosh and Ronny Turiaf, a group that hasn’t played together all season long. It appears as though Norris Cole’s free-fall has left Erik Spoelstra searching for the right rotation. Terrel Harris and James Jones received minutes in recent games, but both sat out Thursday night. A starter for most of the season, Joel Anthony did not play against the Boston Celtics Tuesday and played just seven minutes Thursday night. Anthony would have played even fewer minutes if Haslem played in the second half.

The Heat should be able to hold off the Indiana Pacers and lock up the second seed. But Spoelstra needs to find a reliable eight- or nine-man rotation by the time the playoffs roll around. Miami will play the Charlotte Bobcats Friday at 7:30 p.m., and Spoesltra should be able experiment with new lineups in that game without suffering on the scoreboard.