Heat get back to winning ways, blowout Bobcats 105-82

Share All sharing options for: Heat get back to winning ways, blowout Bobcats 105-82 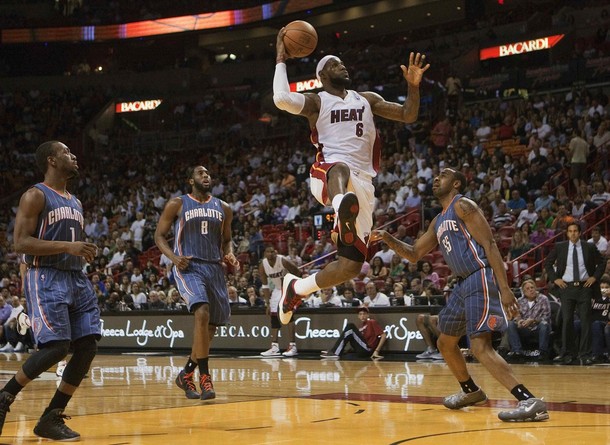 Motorists in Riverview, FL called 911 on Thursday morning when a wild bobcat that had been injured by a car was found by the side of a road. Despite warnings, a well-meaning but foolish woman tried to assist the animal anyway by covering it with a blanket in a fruitless attempt to capture it. The bobcat of course fought back and attacked her with a vicious bite. Animal Services had to euthanize the wounded animal only because of the threat of rabies and not from its injuries.

These Charlotte Bobcats don't fight back at all when wounded, with an abysmal 7-51 record to show for it. They lost their 15th straight game to the Miami Heat in blowout fashion 105-82 at the AmericanAirlines Arena where the final outcome was never in doubt. Among Heat players missing out on the fun were Dwyane Wade, Mike Miller, and Udonis Haslem. Not to be outdone (and likely not to "hurt" their place in the standings), the Bobcats were sitting forwards Corey Maggette, Tyrus Thomas, Eduardo Najera and center DeSagana Diop due to an assortment of injuries.

After the heartbreaking overtime loss the night before to the Chicago Bulls, the Heat would likely have preferred to rest at home on Friday but an easy, bounce back victory over a team not interested in playing for anything anymore netted another win in the standings and some quality minutes for a bench that needed a morale boost and did so while chipping in 44 points and 17 rebounds. Chris Bosh had a solid game with 18 points (8-11 from the field) and 7 rebounds in 30 minutes. LeBron wasn't needed in the fourth quarter after pouring in 19 points, 9 rebounds, and 5 assists. Joel Anthony scored in double figures for the first time this season. Dexter Pittman appeared to be unstoppable in the paint with a career-high 16 points, most of them in the fourth quarter. Even Eddy Curry dunked at the end of the game!

The Heat outscored the Bobcats in the paint 70-26 for a convincing 44-point margin, and had 20 fastbreak points compared to only 2 from the visiting team.

Next up is a Sunday matinee matchup against the New York Knicks at Madison Square Garden in a possible first round playoff preview. Wade is expected to return for the game.