Coming into the Miami Heat’s visit to New York Sunday afternoon, the Heat had failed to secure a road win against a good team. Miami did beat the Philadelphia 76ers March 16, but that team has since gone into a free-fall. Some could argue that the Heat needed a nice road win against the surging Knicks, if only to boost their confidence.

Dwyane Wade and LeBron James made numerous clutch plays down the stretch to make sure the Heat secured the victory. 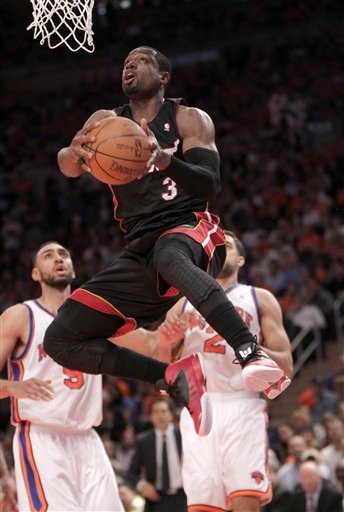 With six minutes left in the contest, the Heat had an 81-80 lead. But Miami went on a quick 6-0 spurt to push their lead to seven, courtesy nearly entirely of Wade and James (Joel Anthony made a put-back on a James jumper). Wade and James then each made a key jumper to put the Heat up 11 with 1:41 left to go. Miami won the game, 93-85, to improve to 42-17 on the season. The Heat also locked up the Southeast division title – Miami’s second consecutive – and currently stand four-and-a-half games ahead of the Indiana Pacers for the second seed in the Eastern Conference.

Miami’s two superstars played superbly today. James had 29 points on 11-of-24 shooting from the field to go along with 10 rebounds and two steals. In the fourth quarter, James defended Carmelo Anthony and shut him down. Anthony had scored 39 points when the two-time MVP checked in with 8:26 left to go, and the Syracuse standout scored just one more field goal the rest of the way. Although Anthony largely settled for 3-point shots at the end, James had a hand in his face every time.

Wade had 28 points on 10-of-18 shooting from the field and a perfect 8-for-8 from the foul line. Wade also grabbed nine rebounds and dished out four assists. The Heat’s two All-Star starters each committed six turnovers, but the team as a whole only committed 15. Both players found ways to score on noted defender Iman Shumpert, despite the turnovers.

The performances from Wade and James were crucial, but the Heat’s other All-Star had an encouraging game. Chris Bosh scored 16 points on 8-of-15 shooting from the field and grabbed 14 rebounds, two shy of his season-high. He played aggressively and effectively against Tyson Chandler, who will earn some votes for Defensive Player of the Year honors.

Ronny Turiaf sat out his second consecutive game, and Udonis Haslem got the start again. Haslem was ineffective in his first game since returning from a stomach flu, scoring zero points in 18 minutes. The Heat actually ended the game with Mario Chalmers and James Jones surrounding the Big Three. It worked well, and it’s always good to surround the Big Three with 3-point shooters. Although Jones has stood behind Mike Miller and Shane Battier in the depth chart all season long, Jones actually played more than Miller and Battier today.

The Heat will visit the New Jersey Nets tomorrow night at 7:30 to complete a four-games-in-five-nights stretch.