The Miami Heat came into Monday’s meeting with the New Jersey Nets looking like they played the day before (and spent some of the night in New York as well). Miami allowed a Nets team without Deron Williams and Gerald Wallace to score 34 points in the first quarter. The Nets even led for the first 47 minutes of the game.

But LeBron James ensured that the Heat did not lose.

The two-time MVP put together a spectacular fourth quarter against the Nets that may have locked up his third MVP award in four years. James scored Miami’s last 17 points to rally the Heat past New Jersey, 101-98. Miami played without Dwyane Wade, Shane Battier and Ronny Turiaf, citing a "maintenance program" to prepare for the playoffs. 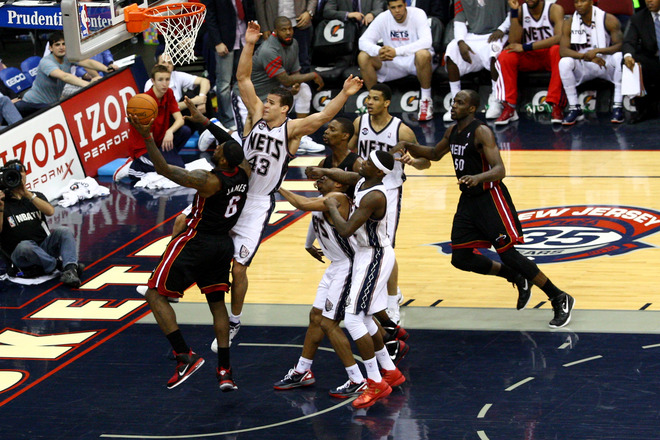 The New Jersey fans showered James with "MVP" chants on a second-quarter trip to the free-throw line, and the road crowd even chanted "Let’s Go Heat" after the Akron, Ohio native made a layup to cut the Nets’ lead to 96-95 with less than a minute left. James’ jumper in the lane to put the Heat up three with 13.8 seconds left should’ve been an and-one. After missing a key free throw against Chicago last week, James wasn’t afraid to go to the basket and get fouled in key moments tonight. He was powerful going to the rim, and sank all of his seven free-throw attempts in the fourth quarter.

James finished the game with 37 points on 11-of-19 shooting from the field and 14-of-15 shooting from the foul line to go along with six rebounds, seven assists and two steals. Even though Wade did not play, James only played a 35 minutes Monday night – below his season average. The Nets built up a 13-point lead in the third quarter and went into the fourth up nine, but Chris Bosh scored eight early points in the fourth to chip away at the deficit and afford James an extended rest.

The Georgia Tech product followed up his solid game against the Knicks with another double-double, registering 22 points on 8-of-16 shooting from the field and 6-of-6 from the foul line and securing 15 rebounds, jumping high to grab several of the caroms. On the flip side, Bosh (and other Heat players) made Kris Humphries look like Karl Malone. Humphries made 12 of his 16 shot attempts for 29 points. Although the Heat got the win, it shouldn’t have been that difficult.

Norris Cole made two fourth-quarter shots to tie the game with six minutes left, finishing with nine points. Cole did have a particularly embarrassing moment to close the third, though. He missed two clear path free throws and then managed to lose the ball off his head and travel after receiving an in-bounds pass in the waning moments of the quarter. Cole’s turnover led to a Gerald Green 3 that put New Jersey up nine entering the fourth quarter. It remains to be seen whether Cole will receive playing time in the playoffs.

Rookie Terrel Harris got his first start of the season. He had some nice moments – like a nice dunk on a breakaway in the second quarter – but needs better awareness. On one possession with an unfriendly shot clock, he passed up on an open 3 to drive to the basket. Harris passed to Udonis Haslem as the shot clock expired. Haslem got another start for the Heat, but had just four points and three rebounds in his second game back since suffering from a stomach flu. Repeating what he did against New York Sunday, Erik Spoelstra went to Joel Anthony instead of Haslem in the final minutes of the game. Anthony actually played pretty well, finishing with eight points, five rebounds and two blocks.

The Heat will host the Toronto Raptors Wednesday night at 7:30 in what could turn out as another "maintenance game."