Share All sharing options for: LeBron and Heat supporting cast pull away from Raptors in second half for 96-72 win 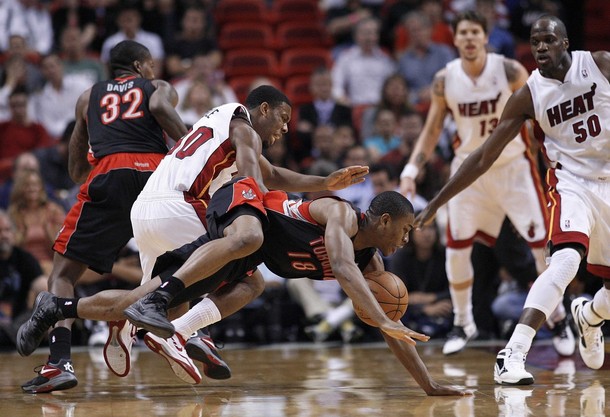 For the second game in a row, the Wade-less Miami Heat allowed a lottery-bound team to keep the game competitive for a lot longer than was necessary. Thankfully this time around, the Heat pulled ahead starting in the second half against the Toronto Raptors for the 96-72 blowout victory, a lot earlier than they did against the New Jersey Nets which necessitated a miraculous one-man comeback from LeBron James in crunch time. Nevertheless, the MVP frontrunner put in another brilliant performance with 28 points through the first three quarters on 12-15 shooting that showed off his shooting range before taking a seat for the final quarter along with the rest of the Big 3, with Chris Bosh also taking the night off with a rematch against division rivals Chicago Bulls the next night. The Heat improve to 13-1 without Wade and assure themselves of at least the #2 seed for the playoffs.

The Raptors scored 8 of their first 11 shots to take a 17-12 first quarter lead that was short-lived, but they managed to go back and forth thanks to a strong first half from Alan Anderson and balanced scoring. A gorgeous bounce pass from LeBron for a Haslem dunk allowed Miami to retake the lead 43-42 with two minutes left in the first half. The Raptors finally lost the lead for good courtesy of a full-court pass from Mike Miller that a twisting LeBron brought down with one hand in between two defenders and then managed to immediately score at the rim a split second before the halftime buzzer. The Heat's defense subsequently allowed just 23 Raptors points for the rest of the game and the blowout was officially underway.

There were plenty of bright spots where many of the supporting players found their shooting touch, particularly Miller with 13 points on 5-8 shooting (3-4 beyond the arc) and Udonis Haslem's 10 points with 5-7 shooting, with the playoffs just around the corner. Miller also finally looked comfortable on both ends of the floor since coming back from injury and also displayed his playmaking skills with 6 assists. Norris Cole (1-8 FG shooting) and James Jones (0-7 FG shooting in a starting role) continue to struggle which will surely impact their ability to crack the postseason rotation.

The Heat get one more chance at possibly catching up with the Bulls for the #1 seed if they can beat them Thursday night and continue their winning streak to close out the regular season.