Share All sharing options for: Top playoff seed still possible after Heat strike back against Bulls 83-72 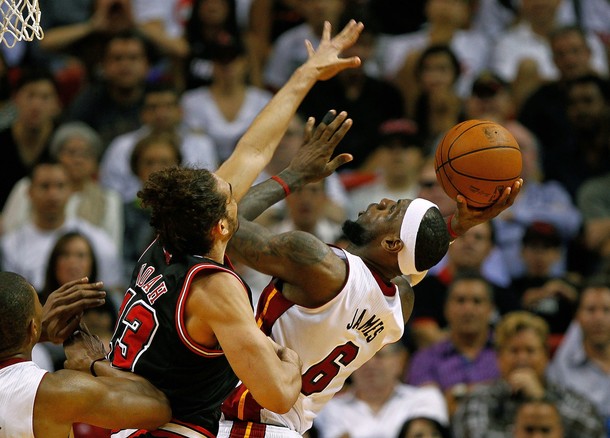 Tensions between the top two teams out in the East are escalating at the perfect time with the Miami Heat striking the latest blow with an 83-72 decision over the Chicago Bulls and pulling within a game and a half for the top seed with just five games left in the schedule. LeBron James and Dwyane Wade played one of their more "emotional" games of the season (while Chris Bosh sat this one out) with Wade getting chippy with Rip Hamilton in the third quarter and shoved him to the ground while jockeying for position. Meanwhile, LeBron didn't jump over him again but did set a hard screen on John Lucas III and then shoved him away after the Bulls guard got into his face after picking himself off the floor. With Derrick Rose missing yet another game due to yet another injury, the Bulls' half-court offense in the second half simply couldn't keep pace with the Heat while its porous interior defense led to several acrobatic baskets courtesy of Wade and LeBron.

The Heat's bench only mustered six field goals for the entire game, two of which were timely three-pointers from Mike Miller and Shane Battier. James Jones could have contributed to the tally but got himself thrown out of the game midway through the first quarter with an obvious hard shove to Joakim Noah. Battier's defense out on the perimeter did help shut down Kyle Korver, who hurt the Heat with his outside shooting during their last matchup in Chicago. Joel Anthony had a solid effort on both ends of the floor, though his box score statistics won't reflect much of his production, but that was about it.

Instead, the Heat's starters - including Dexter Pittman who surprisingly held his own at times in the paint - did enough against a Bulls team that clearly needed their reigning MVP point guard for his scoring but mostly for his playmaking abilities and getting his teammates involved. Aside from Noah's 15 points and Lucas' 16 points, no other teammate scored more than 11 points and just two field goals combined came from Hamilton, Ronnie Brewer, Korver, and Omer Asik.

Mario Chalmers started hot early in the game but cooled off shortly afterwards yet still managed a respectable 16 points to compliment Wade's 18 points and LeBron's 27 points, 11 rebounds and 6 assists. But the game was basically won on defense, where they yielded only 11 points in the final quarter, and the playoff-style pace of the game only netted 5 fastbreak points for the Heat while scoring 36 points in the paint compared to just 20 for the Bulls. They even outrebounded the best rebounding team in the NBA by five, which is a welcome sign for a team that desperately needs to crash the boards in the postseason.

Quite frankly, it was refreshing to see the Heat play hard and tough against their bitter rival while delivering hard fouls and the above-mentioned shoves and the plenty of angry words exchanged. Wade was clearly energized after the spat with Rip, with a quick steal and fast break score immediately afterwards, after coming out sluggish in the first quarter and unable to finish around the rim. It was clearly time for LeBron to also play with some fury and emotion too because playing nasty against the New Jersey Nets is one thing but doing it against an elite team is another. Bosh is next up once he returns to the court.

Just a few games left to see how things shake out in the standings but it appears that these two teams are on a collision course to meet in the Eastern Conference Finals and the bad blood between the two teams, along with the huge question mark of Rose's health, would make it one of the more memorable playoff series in a postseason filled with plenty of other question marks surrounding the rest of the teams.