Share All sharing options for: For Heat, two seed better than top spot

The Miami Heat’s win over the Chicago Bulls Thursday didn’t just show the Heat as the tougher team. It also moved Miami within a game-and-a-half of the Bulls for the Eastern Conference’s top spot. The Bulls have meetings with the playoff-bound Dallas Mavericks and Indiana Pacers coming up while the Heat will face the Washington Wizards twice in the final stretch to the playoffs.

With Derrick Rose’s continued absence, it’s conceivable for the Heat to win out and the Bulls to lose one or two games, therefore ceding the top seed to Miami. The Heat will visit the Boston Celtics next April 24, but the Celtics are already locked into the four seed and have nothing to play for. The only game that looks challenging is the Houston Rockets’ visit to Miami Sunday, with the Rockets fighting for playoff chances and the Heat on the second night of a back-to-back.

Getting the No. 1 seed would certainly have its perks for the Heat. For one, Miami would likely face the Philadelphia 76ers, a reeling team the plays into the Heat’s strengths. The Heat would also have home-court advantage in the Eastern Conference Finals, and winning out could give Miami home-court in the Finals over the San Antonio Spurs or Oklahoma City Thunder.

Yet, Erik Spoelstra should give LeBron James, Dwyane Wade and Chris Bosh rest over these last four regular season games. If they insist on playing, Spoelstra should limit their minutes and essentially coach the games as if they were exhibitions. For Miami, the two seed will lead to an easier road to the Finals than the top seed. 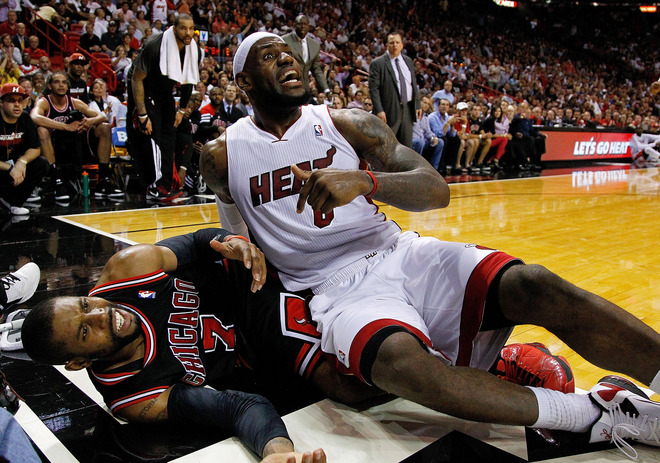 Yes, the New York Knicks have gone 15-5 under Mike Woodson and will have Amar’e Stoudemire back for a few games before the playoffs. But since Carmelo Anthony joined Stoudemire last February, the two stars have failed to create the type of chemistry that would make them spoilers in the postseason. Moreover, the Heat will play up to their potential against the Knicks because of the history of the rivalry and star power on both teams. The Heat have played down to the level of their opponents occasionally, and could do that against the Sixers. It also helps that Woodson has talked about starting Mike Bibby in the playoffs.

But the main reason why the Heat should stay as the two seed lies in the second round. Although the Pacers have won seven straight and have some nice players, they lack the experience of the Boston Celtics. Indiana only won one game against the Bulls in the first round last year, but had Games 1 and 3 in their hands before giving them away. Miami should be able to defeat the Pacers in five games.

The Celtics’ Big Three experiment is currently in its fifth season, and key cogs Ray Allen and Kevin Garnett will hit the free agent market this summer. The players who made up the core of the 2008 NBA championship have a lot of pride and know that this year is their last chance to add jewelry to their collections. Even if Rose is healthy – which isn’t a given – the Celtics could defeat the Bulls in the second round.

And the Heat would love to rest while the Celtics and Bulls fight in a prolonged series. This lockout-shortened season only has one day off between the end of the regular season and the start of the playoffs. The second-round could have back-to-back sets. The added rest the Heat would gain would be more valuable than having home-court advantage over the Bulls, Thunder or Spurs. The team without the advantage just needs to win one game on the road to capture home-court.

The cramps James suffered late against Chicago last night may have signaled that he needs some rest. Instead of trying to secure home-court advantage through the playoffs, the Heat should rest their stars and make sure they’re healthy for the postseason.