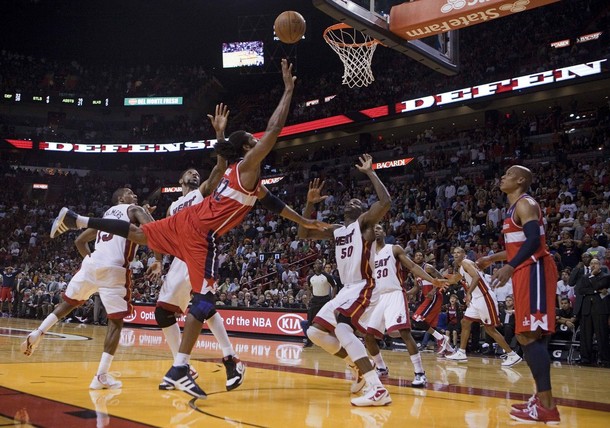 The Miami Heat were without LeBron James, Chris Bosh and then lost Dwyane Wade minutes into their home game against the Washington Wizards en route to a 86-84 loss that all but guarantees their #2 spot in the playoffs. Mike Miller and Mario Chalmers scored 16 points apiece and Dexter Pittman had some decent moments in the paint that were good for a dozen points. Wade's finger was disclocated but x-rays were negative so thankfully no surgery will be needed and rest will be in order with the playoffs a week away. With such a short time frame between the regular season and the postseason anyway, it's important for all three Heat stars to rest up now that it's unlikely they'll be able to catch up to the Chicago Bulls in the standings.

Cartier Martin led the 17-46 Wizards with 22 points, along with Kevin Seraphin and his 17 points as well as John Wall who had a well-rounded game with 13 points, 13 assists, six rebounds and four steals.

The Heat trailed the Wiz for much of the game until breaking out to a four point lead at the start of the fourth quarter but couldn't hold on to the lead for much longer. The Heat might have had a chance if Chalmers and Norris Cole didn't decide to put on an impression of LeBron and Wade in the clutch by holding on to the ball and chucking up iso shots between themselves instead of swinging the ball around and patiently looking for the best shot. Chalmers took 17 shots en route to his 16 points while Cole was 5-11 for 11 points. Udonis Haslem was one of the few bright spots with 15 rebounds, 5 of which were on the offensive glass. Miller also contributed 10 rebounds.

If you needed another indication that this wasn't the normal Heat squad out on the floor, they were outscored 3-22 by the Wizards on fastbreak points and also committed 21 turnovers.

The Heat are right back at it Sunday night at 6:00 PM to host the Houston Rockets, who have something to play for as they fight for a playoff spot out in the West. With Wade sitting this one out, Erik Spoelstra may not be able to keep LeBron off the bench as he seeks to solidify his MVP frontrunner status. Bosh may also play limited minutes. A maintanence plan is all well and good but Spoelstra might not want his star players to be too rusty once the playoffs start.