Heat wrap up home schedule with 97-88 victory over Rockets

Share All sharing options for: Heat wrap up home schedule with 97-88 victory over Rockets 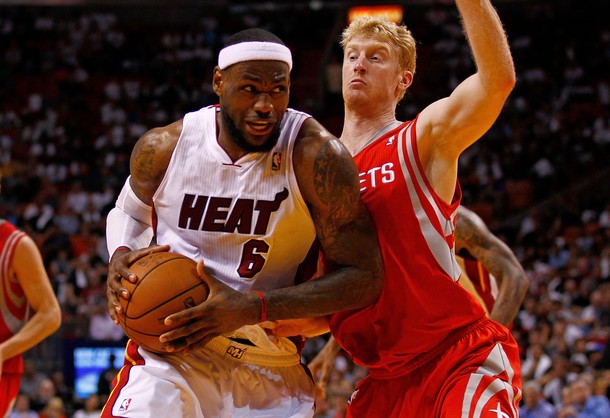 Once again the Heat took their time, with many of their integral players inactive for the game, in seizing control of a game against a beatable opponent. Once again, LeBron James took over and made another strong case why he should be the MVP for the season with 32 points, 8 rebounds and 5 assists on the way to a 97-88 win over the Houston Rockets in their 8th game in the last 11 nights. Dwyane Wade, Chris Bosh, Ronny Turiaf and Mario Chalmers sat out the home finale, where the team finished a dominating 28-5 at the AmericanAirlines Arena, grabbing the second highest winning percentage in Heat history.

With the scored tied at 83-83 with 3:18 left in the game, the Heat's defense took over and only allowed five more Rockets points the rest of the way while scoring 14 points led by LeBron. After hitting a three-pointer, he assisted on another triple to Mike Miller, racked up another assist via a James Jones jumper and then scored on a dunk to make the score 93-85 and essentially close the door on the Rockets' slim chances of making the postseason.

Five Rockets players scored in double-figures but none was impressive as rookie Chandler Parsons, the second round pick out of the University of Florida, with 23 points on 10-13 shooting along with 6 rebounds and 4 steals. Not only did he score on a wide array of moves including driving layups and solid perimeter shooting, he played the passing lanes perfectly and was impressive on both ends of the floor.

Udonis Haslem continues to struggle with his shot but he notched another double-digit rebound performance and did all the little things Heat fans have always appreciated from UD to get his team the victory. Dexter Pittman continues his sudden, improbable journey of making a valid case for actual playing time during the postseason by consistently showing some nice footwork around the rim and making his presence felt in the paint on defense without fouling at every opportunity. Norris Cole was pleasantly effective in a starter's role (thanks to Chalmers sitting out due to the flu) with 16 points on 7-15 shooting but earned only one single assist. The rookie committed only 3 turnovers in 38 minutes, about as good as it's going to get with the young point guard with a lot still to learn about the NBA game. Miller and Shane Battier were also solid off the bench with some nice numbers in just about every category, particularly Shane's 5 steals and Miller's 3-5 shooting from beyond the arc while also grabbing 6 rebounds.

The Heat have two more road games, against the Celtics on Tuesday and the Wizards on Thursday and must win both and hope the Chicago Bulls will lose their final two games for any chance at the #1 spot in the East.