Share All sharing options for: In game without stars, Celtics beat Heat 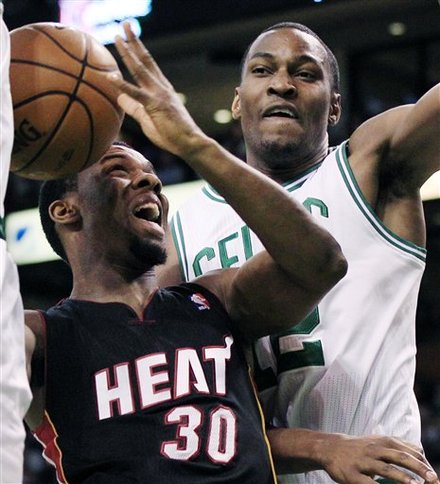 Not surprisingly, the game didn’t feature great basketball. The Celtics went scoreless over the first six minutes of the game, and the Heat turned the ball over 25 times. The score was tied 50-50 going into the fourth quarter (not halftime). But in the end, some late hot shooting from Sasha Pavlovic propelled Boston to a 78-66 win. The Bulls are now officially locked into the No. 1 seed in the Eastern Conference, with the Heat assured of getting the No. 2 seed.

Erik Spoelstra didn’t seem to coach the game to win. Udonis Haslem grabbed 13 rebounds in 24 shot attempts and made three of his four field goal attempts, but sat out the entire fourth quarter. For much of the fourth quarter, the Heat’s lineup featured Norris Cole, Juwan Howard and Joel Anthony. The game was more reminiscent of a bad preseason game or even the NBA All-Star Celebrity Game (yes, it was that bad).

If we learned anything from the game, it’s that Norris Cole probably won’t get any playing time in the playoffs. The rookie point guard shot just 3-of-11 from the field and made several bad decisions, attempting layups against several defenders and committing four turnovers in 26 minutes. Terrel Harris also didn’t help his case to get a rotation spot in the playoffs, going scoreless and committing four fouls in 25 minutes.

Eddy Curry failed to play in this game, which should tell everyone what Spoelstra and the rest of the Heat coaching staff think of him. By the way, it’s worth pointing out that the Heat can waive Curry and sign a point guard up until the last day of the regular season, and that point guard would be playoff-eligible. Carlos Arroyo would probably be the only feasible option since he knows the Heat system. Even though he hasn’t played NBA basketball all season long, Arroyo would probably play better than Cole.

Dexter Pittman scored a team-high 12 points on 6-of-10 shooting from the field. He has a nice offensive touch, but the fouling remains a problem; Pittman racked up five fouls in 25 minutes. Ronny Turiaf will take stand ahead of Pittman in the playoffs. The Heat should find a more athletic center in the draft, and Pittman may find himself on the outside looking in next season.

In fairness to Pittman, he has played well during the Heat’s "maintenance program." He and Mike Miller have probably performed the best during this recent stretch, and Miller made two consecutive third-quarter 3s Thursday night. James Jones scored three triples in the second quarter, but both shooters were largely absent from the offense outside of those fleeting instances. Of course, playing with Wade, James and Bosh will give Miller and Jones more open looks.

The Heat will finish the season Thursday night at 7:30 against the Washington Wizards.