Share All sharing options for: Wizards blow out shorthanded Heat

LeBron James, Dwyane Wade and Chris Bosh all sat out the Heat’s regular season finale against the Washington Wizards Thursday night in advance of Saturday’s start to the playoffs against the New York Knicks. Dexter Pittman, who scored a team-high 12 points Tuesday against the Boston Celtics, also sat out with a slight right hamstring strain. Additionally, Erik Spoelstra limited the minutes of starters Mario Chalmers, Mike Miller, Shane Battier and Udonis Haslem, only playing them in the first and third quarters. 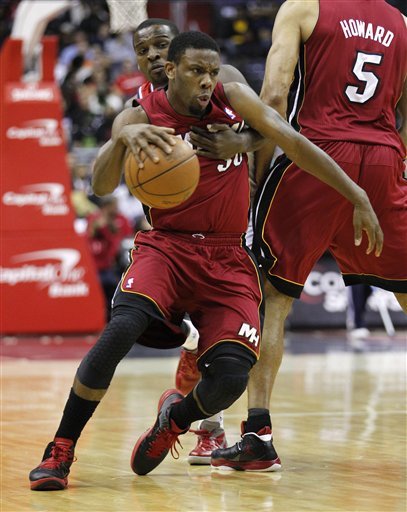 Do I need to say anything more?

The Heat struggled to find any sort of offense, losing to the Wizards 104-70 to close the season 46-20. Miami shot just 36 percent from the field, turned the ball over 22 times and allowed the Washington Wizards to shoot 55 percent from the field and rack up 30 fast-break points. Miami’s regular-season winning percentage roughly equals that of last season. The Wizards played their last game of the season with urgency, and the Heat seemingly played it only trying to keep everyone healthy. But during a third-quarter sequence, Eddy Curry inadvertently stepped on Miller’s foot, leading the 6-foot-8 small forward to limp to the bench. But the role player for the Heat will be fine for the start of the playoffs.

Curry started for the Heat, and actually made the first basket of the game. He quickly became Miami’s go-to scorer, but the Heat fell behind quickly and never caught up to Washington. He finished with 10 points and made six trips to the foul line, getting deep post position and converting layups. He didn't move very well, and seemed to foul his opponents rather than actually attempt to block shots at the rim. Curry doesn’t have the offensive game he had when he was in his prime, and it is puzzling to wonder why Pat Riley did not cut him and sign a point guard in his place after the Heat signed Ronny Turiaf.

Turiaf returned from an eight-game absence to face the team he played on to start the 2011-12 season. He played some nice defense and had a blocked shot. Even though Udonis Haslem and Chris Bosh will start in the playoffs, Turiaf and Joel Anthony will likely receive some playing time off the bench for some energy and shot blocking in the frontline.

As far as the other rotation question – the point guard situation – Norris Cole played well, scoring 14 points on 6-of-10 shooting from the field. He made some nice layups in traffic, but those shots are usually ill-advised attempts when one of the Heat’s stars is one on the floor. Cole also turned the ball over four times. It remains to be seen whether Cole will have a spot in the rotation in the playoffs. Terrel Harris shot a dismal 1-of-9 from the field, and his string of sub-par performances to end the season likely mean that he won't get any playing time during the postseason.