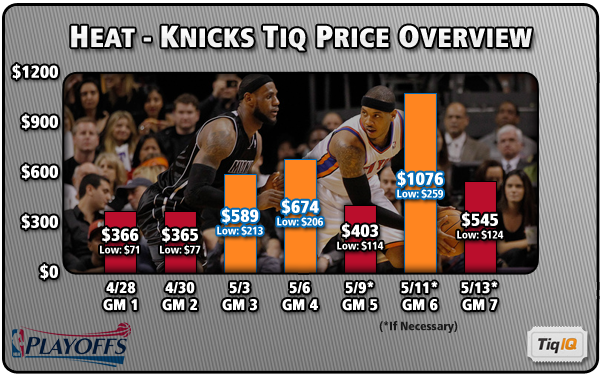 After last year's disappointing end to the season against the Dallas Mavs, the Miami Heat look to restart their run to the NBA championship as they open up the playoffs against the Knicks starting on Saturday afternoon. It's been over a decade since these two rivals faced each other in the playoffs and while Knicks fans are hoping for an upset, and as you can see by the ticket prices, fans in New York are willing to pay big bucks to see their Knicks back in action in the playoffs and gunning for their first playoff victory in more a decade, a mind-blowing gap of of more than 4,000 days.

With tickets selling for 85% higher up north, there are plenty of great deals available for Heat fans. As of now, there are hundreds of seats available for games 1 & 2 for less than $100, but with ticket prices going up now is the time to buy. If you'd like to watch the Heat's first step towards a title, click on the link below for the best deals available. You don't want to be stuck without a ticket to one of the hottest rivalries in the NBA!