Share All sharing options for: Heat easily blow out Knicks 100-67 in Game 1 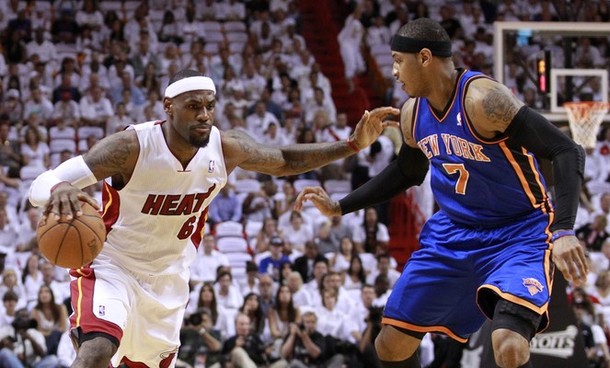 The Miami Heat began their quest to win a championship with a sizzling blowout victory over the New York Knicks 100-67 in the opening game of their first-round series. LeBron James was practically unstoppable on offense, scoring 32 points in as many minutes of play to go along with 4 rebounds and 3 assists, but he also made his mark on defense as well. Dwyane Wade contributed 19 points on a variety of moves towards the basket while strangely not relying on his jumper. Shane Battier also had a fantastic first half on both ends of the floor that caused the Heat fans to give him a standing ovation at the AmericanAirlines Arena. The fans were at their loudest on a day where the Heat came out with plenty of energy to start out with and kept it up throughout no matter what the score was.

"Obviously it was a good win," said Erik Spoelstra after the game. "Our guys had a noticeable look in their eyes the last 24 hours. When you get started in a tough, competitive series like this, in some ways it's better to start without an extra day of prep time to over-analyze and paralyze yourself with too much information. We wanted to just get back to the basics and play to our identity. For the most part, we have to do that by being aggressive and attacking. But we also understand that they're an extremely dangerous team and that's the thing about a long series, that whatever happens we have to be emotionally capable and strong enough now to put it to the side. Now we have 48 hours and it's our responsibility to make sure we have the same look coming into game two."

The Knicks were competitive in the first quarter, largely on the strength of 10 points from Baron Davis (who didn't score a point afterwards) and some careless turnovers from the Heat, but the Knicks essentially lost the game in the second quarter by only mustering 13 points against a suffocating Heat defense. Knicks coach Mike Woodson couldn't really figure out exactly what went wrong so quickly for the Knicks' offense beginning in the second quarter.

"I wish I could explain it. I thought we played well and we came out ready to play the first six minutes. We were playing pretty well and then all hell broke loose. I think we wanted to do so well in the first game and we were playing so quickly that we kind of got out of rhythm. You got to give (the Heat) credit, their defense was solid throughout the whole game. But it's just one game, we've got to bounce back."

Carmelo Anthony was continuously hounded by LeBron James and Shane Battier but was also guarded at times by Mike Miller as well on a forgettable night where he only shot 3-for-15 and closed with just 11 points. LeBron was pleased with the Heat's defensive effort against his good friend but warned the success might be short-lived.

"Our strategy, our system worked for game one but he's a great player and he's going to make adjustments like all great players do. We've got to be ready for him in game two."

Not helping matters for the Knicks was the sudden loss of rookie Iman Shumpert, who crumbled to the floor in pain after attempting a crossover dribble move after crossing the half-court line and blowing out his knee. He will undergo an MRI to find out the severity of the injury. With news that Derrick Rose tore his ACL and is out for the rest of the postseason, the playoff picture has dramatically been altered because of injuries. For the Heat, the blowout gave LeBron and Bosh a chance to rest the entire fourth quarter while Wade played several minutes before being subbed out for Norris Cole. With the second game of the series in just 48 hours, the three stars were only needed for around 30 minutes each - enough to shake off some rust after playing sparingly during the last two weeks of the regular season.

The game didn't exactly replicate the bitter rivalry from a decade ago but still featured plenty of trash talking and hard fouls. LeBron was hit from behind by an over-aggressive screen courtesy of Tyson Chandler that was classified as a flagrant-1 foul. "I got hit with a blind pick," explained James. "It's all right. But I've been hit harder than that, I've played football." Mike Woodson was also hit with a technical foul for arguing a call with an official in the third quarter and Carmelo got one 14 seconds later as well. Amar'e Stoudemire and Udonis Haslem were hit with a double technical for jawing at each other while Haslem was walking to the free throw line after getting fouled.

"My technical foul, I have no idea what that was for," said Amar'e. "Udonis is a friend, we're both Floridians and we were just doing a little trash talking in the playoffs. We didn't say nothing provocative. He says he's going to make his two free throws and I said you're not and then we got a double tech."

Game two of the series is on Monday April 30 at 7:00 PM as the Heat look to take a 2-0 series lead before the series shifts to New York.