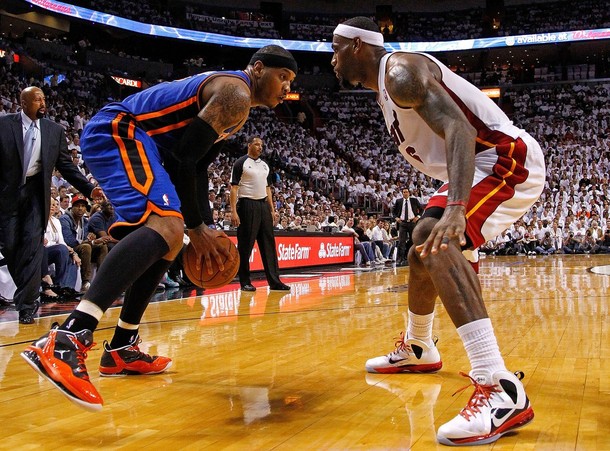 The New York Knicks collectively played a solid game with Carmelo Anthony leading the charge with 21 first half points on 9-18 shooting en route to a 30-point night, Amare Stoudemire chipping in 18 points and Tyson Chandler with a much-improved game after playing ineffectively with the flu in the opening game of the series. Yet, it wasn't close to being enough to overcome the Miami Heat in the second half as the home team pulled away for a 104-94 decision that gives them the 2-0 lead that puts them in control of the series.

Such was the frustration after the Knicks lost their 12th straight posteason game, a stretch dating back to April 29, 2001, that a chaotic scene unfolded in the hallway outside the Knicks locker room at the AmericanAirlines Arena after Stoudemire punched the glass enclosure of a fire extinguisher immediately after the game. The corridor, used by a variety of people including members of the media, VIP ticket holders to the game, AAA staff and the Heat dancers, was completely shut off as Miami Dade paramedics rushed to the scene escorted by Knicks personnel. With a laceration to his left hand that likely required stitches, it appears highly doubtful Amare will play on Thursday night for Game 3 at Madison Square Garden, a huge blow to a team that already lost Iman Shumpert to a torn ACL in Game 1 and with a hobbled Jeremy Lin still not ready to return from his injury.

The hoopla overshadowed the action in an entertaining game in which the Heat fended off every run the Knicks put together and comfortably held them at bay, with the last tie in the game at the midway point of the second quarter when the score was 39-39. Even with an improved gameplan that held LeBron to 19 points with just 8 field goals and got Carmelo back on track offensively, the Heat was never truly in danger of losing their lead in the second half as starters Chris Bosh, Dwyane Wade and Mario Chalmers combined for 59 points.

LeBron may have been held below 20 points but he made his mark in just about every other aspect of the game with 9 assists, 7 rebounds and solid defense against Carmelo, who needed 26 shots to get to 30 points. Wade was particularly aggressive from the start, scoring from a variety of moves towards the basket while practically ignoring his jump shot the entire series. Bosh also was solid, a welcome sign after a quiet opening game in which he only scored 9 points and was timid around the basket area.

Mario Chalmers was quite impressive in the fourth quarter, particularly during the opening minutes while LeBron rested, with 9 points on 3-5 shooting including a three pointer. Mike Miller and Shane Battier each scored 11 points and both went 3-5 from beyond the arc. The Heat kept their turnovers to a minimum with just 8 for the game and tallied 28 assists while the Knicks only had 15, but they were outrebounded 40-33.

"It's a good team win," said Erik Spoelstra. "A lot of guys contributed on both ends of the court. And so ultimately what we talked about is that we did what we were supposed to do. We're already trying to leave this game behind. We've got a couple of days to decompress and then get back to it and try to regenerate this energy and focus."