Share All sharing options for: LeBron James holds off Sixers

Coming off their worst loss of the season, the Miami Heat used runs in the third and fourth quarters to hold off the Philadelphia 76ers 99-93. Dwyane Wade missed the game with a bruised left knee, but he is expected to return for Wednesday’s game against the Oklahoma City Thunder. Miami swept the season series against Philadelphia, and would face the Sixers in the first round for the second consecutive time if the standings remain they way they are. 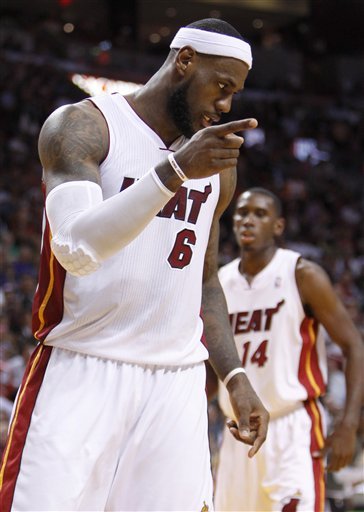 Philadelphia cut the Miami lead to 86-83 with fewer than three minutes left to go, but the player often maligned for his performance in fourth quarters of the 2011 NBA Finals made numerous clutch baskets Tuesday night. LeBron James made two consecutive jump shots to put the Heat up seven. After Thaddeus Young made a hook shot to cut the lead to five with 1:48 left to go, Shane Battier grabbed a crucial offensive rebound that led to a James alley-oop dunk from a Mario Chalmers pass. Philadelphia went into a fouling mode after the dunk.

James recorded a season-high 41 points on an efficient 15-of-25 shooting from the field and 10-of-13 shooting from the foul line. The two-time MVP also had six rebounds, four assists and three steals. The Heat went more than four minutes in the fourth quarter without scoring, but James became more aggressive to hold off Philly. During the drought, James was double-teamed and passed to Mario Chalmers and Terrel Harris for errant 3s. In the final three minutes, James initiated the offense quickly and made his moves.

Two Heat players who struggled against the Boston Celtics Sunday – Chris Bosh and Mario Chalmers – had encouraging nights Tuesday. Bosh scored 17 points on 6-for-12 shooting from the field, winning his match-up with Elton Brand, who shot just 1-for-6 from the field. During the early stages of the fourth quarter, Bosh helped the Heat extend their lead with James on the bench. He only grabbed five rebounds, but Udonis Haslem had 11 boards off the bench. Haslem passed Alonzo Mourning for first place on the Heat’s defensive rebounding list in the first half.

Chalmers, meanwhile, had 19 points on 6-of-13 shooting from the field and a perfect 6-for-6 from the foul line. The former Kansas standout also had six rebounds, four assists and two steals. He drove to the basket early in the game, rekindling memories of his impressive rookie season. Even while playing with three All-Stars, Chalmers can be more than a standstill shooter.

Harris, the seldom-used rookie, made two nice drives to the basket in 18 minutes off the bench. Erik Spoelstra also gave Harris some playing time against the Toronto Raptors last Friday. Norris Cole has played poorly since his superb start to the season, and he was ineffective tonight. Perhaps Harris is auditioning for Cole’s minutes. The rookie from Oklahoma State was outmatched against the longer Evan Turner, though. The former No. 2 pick scored on Harris on three consecutive possessions.

The Heat will host the Thunder Wednesday at 8 p.m. on ESPN2.