Heat get revenge on Thunder, LeBron has MVP performance over Durant

Share All sharing options for: Heat get revenge on Thunder, LeBron has MVP performance over Durant 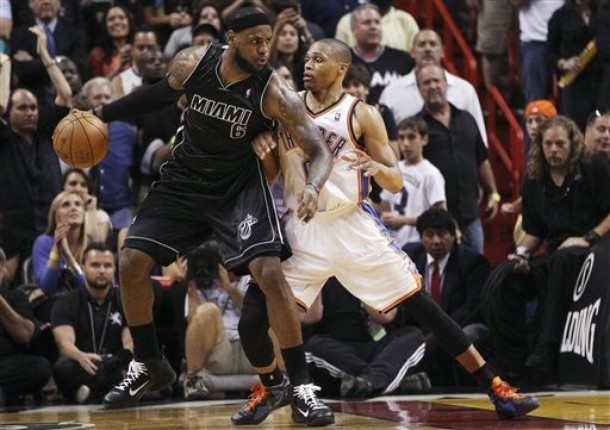 In one of the most thrilling games of the season, the Miami Heat held off potential Finals rival Oklahoma City Thunder 98-93 to keep their home winning streak going strong at 17 games as well as tying the regular season series between the two teams. The victory avenged the recent blowout loss on the road to the Thunder as well as giving LeBron James a strong push for his MVP campaign over Kevin Durant with 34 points, 10 assists and 7 rebounds. Durant scored 30 points but had a career-high 9 turnovers while Russell Westbrook added 28 points from a dismal 9-26 from the field.

The AmericanAirlines Arena was brimming with a playoff-like atmosphere and both teams came to play with a different level of energy. The first quarter played out evenly while Dwyane Wade was finding his way after coming back from a one-game absence due to a bruised left knee. The interior Thunder defense led by Kendrick Perkins and Serge Ibaka did an excellent job protecting the rim from Wade, Mario Chalmers and LeBron. Chris Bosh struggled throughout the game to create his own offense while being contained by Ibaka. The Heat were able to keep up with the Thunder behind a Chalmers 3-pointers and back-to-back shots beyond the arc courtesy of James.

The second quarter featured the Thunder getting physical as the Heat began creating more fast-break opportunities out of turnovers. Perkins got away with a flagrant foul after bumping and then swiping at Wade but was given a technical for complaining to the refs. The very next Heat play featured LeBron getting fouled hard in the air by Westbrook which earned the Thunder a flagrant foul and boos for Westbrook the rest of the game. The Heat as a team picked up their game on both ends after the two rough fouls with Chalmers hitting his third and final three-pointer for the game and LeBron with another three-pointer, a free throw, a breakaway dunk after picking off a Perkins pass, an assist to Wade for a driving layup and a jumper at the top of the key at the halftime buzzer for his 23rd point of the half and lead his team to come back from an 11 point deficit and take a one-point lead.

The Thunder settled down in the second half but the Heat missed their first 7 shots before getting back on track and going up by 9 points. Once again, the Heat couldn't hold on to the lead thanks to a 10-0 Thunder run to open the fourth quarter. LeBron and Wade did all the heavy lifting as Bosh continued to struggle with his shot up until the final minute of the game where he hit a long jumper the Heat desperately needed to fend off the Thunder. Bosh then fouled Perkins from scoring an easy layup and both of the subsequent free throws were missed.

We already knew that an NBA Finals matchup between the Heat and the Thunder would certainly be entertaining, but fans did get a great preview tonight of how fast-paced it could potentially be and that suits the Heat much better than a slow, grind-it-out, halfcourt game. The Heat's high-octane offense, fueled by a stifling defense contesting every shot and creating turnovers, had been missing for the most part since the All-Star break and it was reassuring to set it in action against elite competition.

In the end, the victory is well-deserved and the Heat can enjoy it for the time being but questions still remain for this team as the season rapidly approaches its end and the quest for a solution to their road woes temporarily shelved for the time being as the home stretch continues onward. Bench production continues to be up-and-down as does the point guard play from Chalmers and Norris Cole. The Heat need the consistency that Bosh enjoyed earlier in the season as well. A solid win over a team like the Thunder may very well re-energize the team for the final month of the season however and the Heat have a great chance to catch up to the Chicago Bulls and the Thunder for homecourt advantage throughout the playoffs with two games left against Chicago.