Share All sharing options for: Home winning streak ends at 17 as Heat get clobbered by Grizzlies 97-82 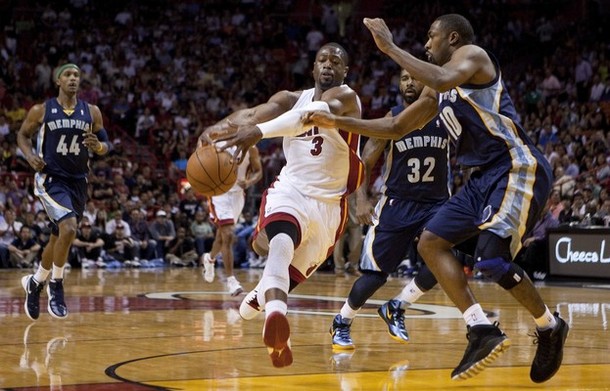 The Miami Heat's sluggish and lackluster play that has popped up since the All-Star break finally made it's first complete appearance at the AmericanAirlines Arena where they fell flat 97-82 without ever holding the lead against the Memphis Grizzlies Friday night. The team's total points were not indicative of the entire night's struggle to consistently score and protect their own rim against the likes of Marc Gasol and Zach Randolph. The Heat once again committed lots and lots of turnovers, frustratingly of the "unforced" kind, and their sloppy play indicates that no matter how much Erik Spoelstra stresses there are no excuses with regards to the unforgiving schedule, managing to score just 12 points in the opening 12 minutes to go along with an unreal 11 turnovers only reinforces the perception that the Big 3 might need to rest up for the playoffs.

Then again, the Grizzlies are about to wrap up a brutal stretch of 7 games in 9 days and had just beaten the OKC Thunder four days ago on the road. Their depth was too much for the Heat and even enjoyed a boost from Gilbert Arenas who came out of nowhere to score as many points (on 4-5 shooting beyond the arc) in as many minutes as the entire Heat managed in the first quarter.

The Heat scored just 7 transition points for the entire game and four of those points came in back-to-back buckets by the Heat's lone bright spot of the night, Terrel Harris. The rookie scored in double-figures off the bench to go along with 4 assists and 6 rebounds (two more than Chris Bosh, more on that later) and showed some nifty passing skills. In contrast, Norris Cole can't buy a bucket these days and has shot 2-for-21 in his last four games and Harris' performance might convince the coaching staff to hand more minutes to Harris at the expense of Cole. Aside from that, only Joel Anthony shined in his new/old role of "energy guy off the bench", a role he's much more suitable for then starting games. and the AAA crowd made sure to cheer on his hustle, as there was precious little of it on display from the home team.

The Big 3 collectively never got into the game. I feared it was going to be "one of those nights" as soon as I saw Wade miss dunks at the outset and LeBron blow easy layups when the Heat were desperately trying to cut the Grizzlies lead to single digits in the third quarter. Bosh may have shot better than he has been lately but still managed to only grab four rebounds for the entire game and has averaged just 6.4 in the last 10 games. Since the February 21st game against the Sacramento Kings, he's only grabbed double-digit rebounds in one game versus the Boston Celtics last Sunday, a span of 21 games (3 of which he didn't play in).

At this point it would be wise to rest up the starters and settle into the #2 seed for the playoffs. Or more games like this are on the horizon.