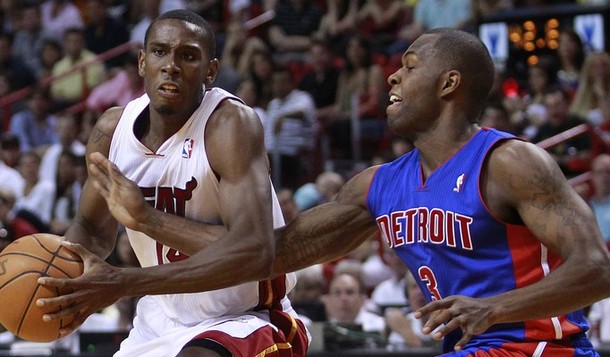 The Miami Heat enjoyed a pleasant Easter Sunday with an easy 98-75 blowout victory over the Detroit Pistons behind a strong defensive performance, holding their opponent to just 37% field goal shooting. Chris Bosh and LeBron James picked up the slack with 48 combined points while Wade sat out another game with a mild injury from tweaking his ankle during a dunk attempt on Friday night.

The coaching staff were wise to sit Wade against an opponent that was outmatched by the Heat in every category tonight, and not just because the Heat's record somehow now stands at 10-1 for the season when Wade is not playing. While it was a welcome sight to see the consistent effort on defense, what was even better was seeing many contributing players having their moments to shine in making up for Wade's absence. James Jones made a strong case for regular minutes with a spectacular display of shooting prowess beyond the arc on 6-of-8 3-point field goals. Ronny Turiaf easily had his best game in a Heat uniform as he settles into his starting role, protecting the paint but effective as well at guarding the pick and roll along with some nifty blocks. Terrel Harris had a couple of shaky moments as the primary ballhandler in the second half when faced with full-court pressure (no, he's not a point guard) but showed he has earned his spot in the rotation ahead of fellow rookie Norris Cole. Bosh had a well-rounded game with 22 points on 7-18 shooting, 9 rebounds along with some solid defensive sequences. Mike Miller returned from injury and didn't do much offensively but at least has the opportunity to return in time to shake the rust off before the playoffs start.

The Heat and the Pistons played evenly in the first quarter and deep into the second quarter but as the game wore on, the Pistons offense gradually devolved into a collection of perimeter shot attempts thanks to the Heat's active interior defense. Pistons center Greg Monroe had 6 of the Pistons' first 8 points but wouldn't score again until midway into the fourth quarter. The Pistons' defense was even worse however, providing little help against the penetration of the Heat. Though the Pistons did manage to end the third quarter on a 7-0 run to cut the lead to just 15 points, the outcome of the game was never in doubt and each of the three-pointers that Jones was hitting kept the lead well into blowout territory.

With the Heat's 40th victory of the season and the #1 seed in the East and best record in the NBA suddenly within reach for Miami thanks to a Chicago Bulls loss to the New York Knicks, the game against the Boston Celtics on Tuesday represents another opportunity for revenge at home after a tough loss on the road (just like the OKC Thunder). But more importantly in the bigger picture, racking up victories could pave the way for an easier road to another potential Finals appearance. While Wade sat tonight, it remains to be seen how willing the coaching staff will be in sitting their stars when there is a possibility of climbing in the standings with few games left in the regular season.