Share All sharing options for: LeBron James earns his fifth Eastern Conference Player Of The Week honor of the 11-12 season 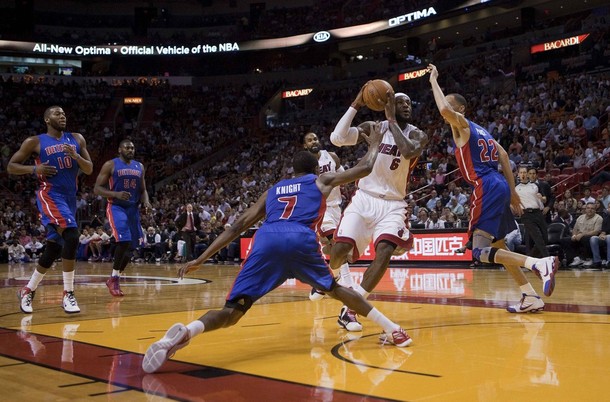 After a puzzling March where the team's offense as a whole fell flat, LeBron James has been picking up his MVP-caliber play lately which has propelled the Heat within reach of the best record in the East and the NBA. The league, in its infinite wisdom, has recognized LeBron's efforts for games played between April 2 through 8 and awarded him with his fifth Eastern Conference Player of the Week honor of the season. Since winning the award four times in the first eight weeks of the regular season, LeBron last won it for games played between February 13-19. LeBron's MVP campaign gets a little boost as a bonus, with rival Kevin Durant now alone at the second spot with four such honors, while both have won Player of the Month honors twice in three opportunities.

James led the Heat to a 3-1 week with averages of 30.5 points, 5.8 rebounds, 5.5 assists and 2.3 steals. James led Miami in scoring and minutes in all four games, and steals and assists three times each. He recorded one double-double while scoring at least 20 points in all four games, including three games with at least 25 points, two 30-point performances and one 40-point game - a season-high 41 points during a 99-93 win over Philadelphia on April 3. The 26-point effort marked as his 411th consecutive game scoring in double-figures, tying for the seventh-longest streak in NBA history.