Prior to the start of the 2012 NBA playoffs, some worried about the Miami Heat’s rotation, which remained unsettled all through the regular season. Some saw that Mario Chalmers tapered off after the All-Star break, and wondered what that meant for the playoffs. Others expressed concern over the wide-open shots Udonis Haslem and Shane Battier missed, or Mike Miller’s health.

Now, no one voices such unease with the roster. Despite the Knicks’ turn of bad fortune – Iman Shumpert’s ACL tear and now Amar’e Stoudemire's self-inflicted hand laceration – the Heat have played exceptionally well to start the playoffs. Playing their best basketball since prior to the All-Star break, the ancillary players have made timely contributions thanks in part to Erik Spoelstra’s set rotation. 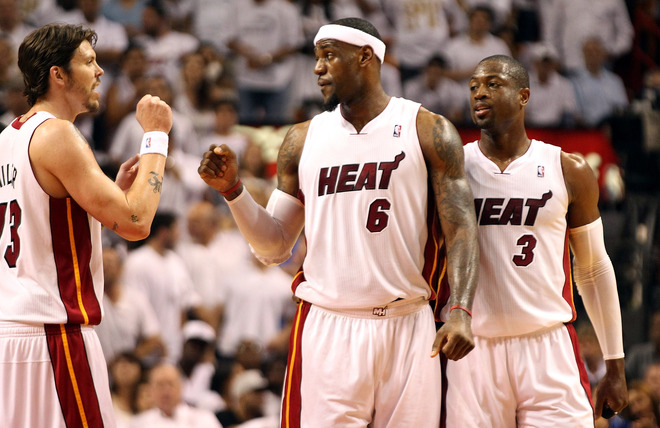 Spoelstra inserted Udonis Haslem into the starting lineup and moved Chris Bosh to the five after the Heat played the Boston Celtics April 10. Perhaps Spoelstra saw that Doc Rivers started his best big men in Kevin Garnett and Brandon Bass and decided to do the same instead of worrying about positions and starting Joel Anthony or Ronny Turiaf. Aside from the starting unit, Spoelstra has primarily played Miller, Battier and Joel Anthony off the bench while giving Norris Cole and James Jones spot minutes. Haslem hasn’t played a lot this series, but that’s because Mike Woodson has gone extended stretches with only one big man on the court and four perimeter players. Although Haslem is a better rebounder than Chris Bosh is, Bosh is the superior player and deserves the playing time. If the Heat play a bigger team like the Indiana Pacers in the second round, expect Haslem to play much more. Even while playing just 20 minutes per game in the playoffs, Haslem has grabbed eight boards in each of the two contests.

But the Heat have seen the biggest boost from the perimeter players – Chalmers, Miller and Battier. Aside from starting the Heat’s two best big men, the new starting lineup allows the Heat to use the lineup of LeBron James, Dwyane Wade, Miller, Haslem and Bosh as early as the midway point of the first quarter. Miller has attempted an average of seven 3s in the first two playoff games. By contrast, he attempted three triples per game in the regular season. If Miller and Battier make those 3-point shots instead of passing them up, the Heat become a dangerous team.

After shooting just 34 percent from 3-point land during the regular season, Battier has shot 5-for-11 from downtown thus far. His 3 with fewer than three minutes left in Game 2 put Miami up 97-83 and shut the door on the game. Although Carmelo Anthony made some jumpers on Battier in the first quarter of Game 2, the former Syracuse standout was much less effective the rest of the way. All in all, Anthony took 26 shots to score 30 points, a ratio the Heat will take. Additionally, Miami didn’t have that extra wing defender to relieve James for stretches last season.

Meanwhile, Chalmers has averaged 12 points and 7.5 assists in Miami’s first two games. He scored Miami’s first six points of the fourth quarter in Game 2 and later made a corner 3 courtesy of a pass from Bosh for nine points in the final stanza of play. The most encouraging sign from Chalmers thus far is that he is playing as more than a 3-point specialist. He’s getting to the basket and drawing fouls. During his rookie season, Chalmers routinely drove in the lane and made floaters and layups. When Wade or James rested in Games 1 and 2, Chalmers has recognized his opportunity to attack.

The Heat have only held serve at home. Although Amar’e Stoudemire will likely miss the rest of the series, Games 3 and 4 will be more about the Heat than the Knicks. Will the Heat put out a shorthanded team on the road, or will Miami get complacent and end up letting the series extend itself? We’ll have to see how the Heat players perform on the road, but the quality production from the supporting cast stands as a good sign.