The Miami Heat held a slim 58-56 lead entering the fourth quarter in Game 3 of their first-round series against the New York Knicks. LeBron James and Dwyane Wade struggled mightily in the first half, and James had to sit the final seven minutes of the third quarter because of foul trouble. Both teams struggled to score and take care of the ball. 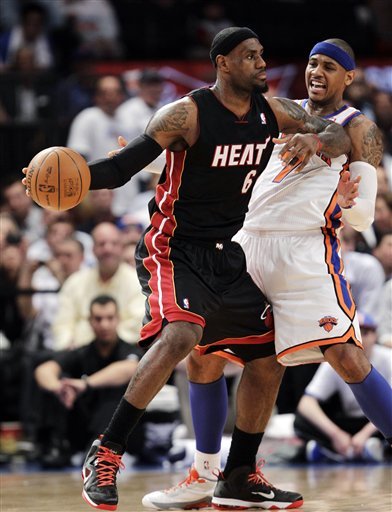 The Heat utterly dominated the fourth quarter against the Knicks 29-14 to take a commanding 3-0 lead in the series. No NBA team has ever come back from such a deficit and won the series. The Knicks lost their 13th consecutive playoff game, setting a new NBA record.

James scored the first eight points of the fourth quarter, propelling the Heat to quickly blow the game out of the water. Miami increased the lead to 12 with six minutes left on a Mario Chalmers 3-pointer, and the lead crested at 19. Aside from a nice J.R. Smith dunk, the Knicks offered little in the fourth quarter while essentially playing for their season.

Prior to the game, Chris Bosh flew to Miami to witness the birth of his son Jackson in the early morning hours. He took a flight back to New York and arrived just in time for the game, starting for the Heat. Bosh only attempted five shots, and the Heat only ran a few plays for him. But Bosh did grab 10 rebounds in 37 minutes, helping close the rebounding deficit from 33-40 in Game 2 to 40-42 in Game 3.

As for the Knicks’ shooters, Steve Novak was a non-factor thanks to former Marquette teammate Dwyane Wade’s great defense. On one defensive possession, Wade sprinted to cover a wide-open Novak in the corner and gave him very little airspace, leading to a 24-second violation. New York shot just 4-of-20 from downtown.

The soon-to-be 3-time NBA MVP went on a scoring binge to open the fourth, but James also helped keep the Heat playing aggressively defensively up until the buzzer sounded. The Heat had a 14-point lead with four minutes left, but James met Anthony at the rim and blocked his shot cleanly on one possession. The referees incorrectly called James for the foul, but it sent a message to the Knicks. After Anthony’s second free-throw attempt caromed off the rim, Wade saved the ball from going out of bounds and crashed into his team’s bench. The game was already over then, but the Heat let the Knicks know that they weren't getting anything easily.

Miami will try to finish off the Knicks Sunday at 3:30 on ABC.